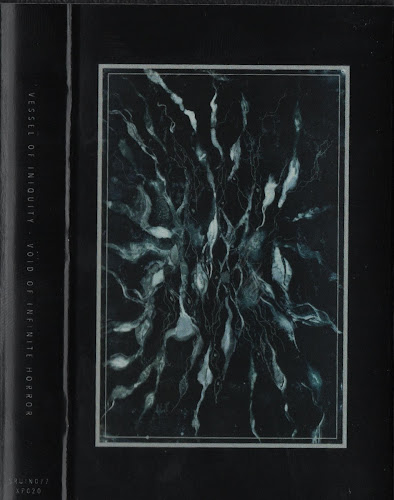 Vessel of Iniquity's debut full length, Void of Infinite Horror shares much with the Vessel of Iniquity EP, however takes a slightly more refined and focused approach to differentiating individual tracks. On the surface, this gives the five tracks a variegated feel, a more complete album experience. In truth, there isn't a significant change in the amount of slow to fast moments, but there is a shift of awareness in how best to utilize them within the saturated noise-black-death metal mixture which lone puppeteer S.P. White is pulling the strings at. The result is a better paced release with it's extremes more heightened allowing for a better semblance of actual tracks, instead of experiments in noise and ebbing melody. In some respects, then, Vessel of Iniquity as a project lost something and gained something; gone is the youthful extreme miasma and welcomed is a mature approach to a genre often lacking focused songwriting.

To be sure, Void of Infinite Horror retains the harsh forceful black death metal blast-beat madness. This is evident from the starting block; hyper-speed black death metal blasting lifts the listener into a state of transcendence as soon as "Invocation of the Heart Girt With A Serpent" begins. In four minutes, we are afforded time to seek order from the chaos, to find melody where there is none, to pick out moments and heighten them. It's a Where's Waldo type of experience. There are nuances; some higher pitched screeches and wails, several seconds of an empty respite towards the song's tail end, drum fills... but where the self titled EP's blasting hid slower motifs beneath, there are no patient rolling cadences to be found here; it's the only track where there isn't a noticeable languishing component present.

Second track, "Babylon", takes the opposite approach, playing with contrasts in speed. "Babylon" initially reminds me of Incantation's slowest moments with added atmospherics. It is also similar to "Choronzon" off the EP in it's overall impression. Here, however, the riff itself is slow, the drums are precise drawn out bludgeoning with intervals of space between them. This new rhythmic ground for Vessel of Iniquity to tread on puts S.P. White's creativity on display. The song is atmospheric and memorable; it's the first track which really stands out to my ears. Though a short blitz appears halfway through, the song's overall focus is patient, fetid, and of boroughs unexplored. Followed by another slower composition, "Void of Infinite Sorrow", the album inches forward with a smooth drift at it's heart.

"Mother of Abomination" brings back the speed and blasting up front while the atmosphere slowly pulses and throbs beneath; the juxtaposition is key to Vessel of Iniquity's attempt to tame the chaos. It is as if we have been given a listening test. Will you be overwhelmed by the up front brutal cacophony or will you acclimate to find the song hidden behind the chaos. The album closes with "Once More Into The Abyss," an ambient styled track of echoing and effected tones wavering in and out darkly. The song phases into a harsher tribal vibe before closing out the album.

Vessel of Iniquity may ultimately be plowing the grounds which bands such as Diocletian have previously tilled, however the quality and breadth of atmospheres present on Void of Infinite Horror does bring something - if not entirely fresh - ripe to the genre. White proves himself to be masterful at giving each track a slow element and a fast element. If the percussive element is blasting away, there is a slow tidal melody hovering not far below in the mix. If the song is rhythmically sluggish, a fast element is incorporated at some point to highlight the slower parts, maybe in a brief period of blasting percussion, maybe in a quickly phasing static harshness - static always appears as a 'fast' texture - which is layered on top the other wise slower elements. In a way then my description of the band as being "funeral doom but opposite" wasn't far off when I reviewed the demo; the band are still rooted in something slow, even if there is a usage of hyper-speed elements to emphasize this. 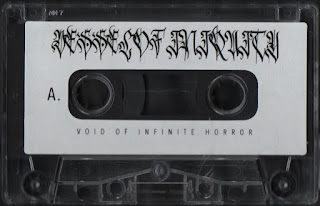