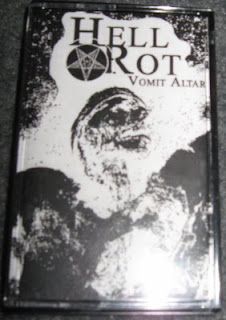 Rarely have I been privy to a true auditory recreation of bizarre circumstances and events. Hell Rot have created a nostalgic piece of dirty nasty blackened filth that puts to shame anyone trying their hand at the Von style of black metal. Including Von themselves. This is better realized than Von, more malevolent and more interesting. Not a carbon copy by any means, this is similar to the dirges playing during ancient marches of demons that plague your nightmares. There is a distinctive militant style to the music, particularly the drumming, which arouses my inner need to slaughter the holy and raise my blood filled chalice to the elder gods and proclaim allegiance to shadowed, goat masked figures. This is a perfectly logical sextuplet of tracks to blast while hammered at four in the morning. I am sure that you'll find yourself wandering the streets with a large kitchen knife yelling Crucifuck over and over again.

While the tracks are short, the longest segment being the combination of the Intro track and the blistering opening track Marginal, the tape runs for a perfect demo length leaving me yearning for more crusty filth yet also not disappointed in the product handed to me. Too often, I listen to albums that bore me after the fourth track (I'm looking at you Solitude Aeturnus). The barbarity, energy, and urgency of this demo is uncompromising. This is a demo that has found a space, and is annexing more and more territory, leaving the empty husks of ill fated and weaker demos in it's path and crushing into dust the cassette cases and jewel cases under the bloody boots of Hell Rot's ancient battle tactics; nothing less than a scorched earth policy.

This album is vitally reliant on the simple, yet genius, drum compositions of sole musician Goat. With a roughly two rhythm approach to his drum style, he blasts away through the general brunt of the demo. The key is his use of the toms which are hammered in the manner of a mad drummer boy in Satan's advancing army of rotting minions. Third track, Goat Chapel is a perfect example of his militant style. With only two different drum beats in the track, the emphasis once again falls on the floor tom which is banged in a direct and intimidating pattern. Crucifuck and Alcoholocast are earthy doomy crust dronings creating a duality to the faster pieces. In essence: two picking-up-the-mutilated-remains-of-your-enemies-kind-of tracks. Alcoholocaust is the better of the two but the sinister nature of "Crucifuck" leaves me feeling a bit uneasy though with a massive smile on my face loving that someone, somewhere is making music this evil.

The fact this is a tape only release also makes me sit back and realize that the humble cassette demo is still a one hundred percent viable commodity and not something to be ignoring. Hell, in the past few weeks, some of my favorite music has come to be by way of cassettes leaving me captivated and searching for cassette only releases. Be sure to snatch this up if you find it - it's limited to twenty copies and as far as I know, is most likely sold out by now. Worship the Goat priests at the Vomit Altar or the minions of Hell Rot will consume you next.
Posted by Orion at 6:06 PM No comments: