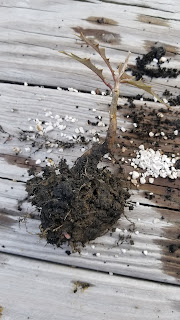 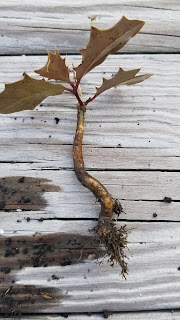 This common North American broadleaf evergreen bush appeared in the front garden along with a host of other seedlings I dug up this spring. It was growing in some compacted clay soil and had a very meager root structure, almost looking like the root on a tooth instead of a tree. I repotted it not expecting much and hoping that it would recover by some miracle.

The tree was planted into 100% Napa 8822 diatomaceous earth. The complete lack of a root structure to support the tree meant that I needed to support it artificially so I used two rocks from the front garden to do so. Repotting this in March before there was any signs of life may have been a bad idea. 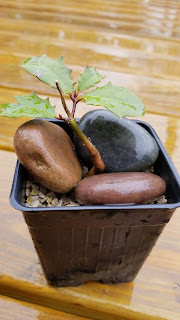 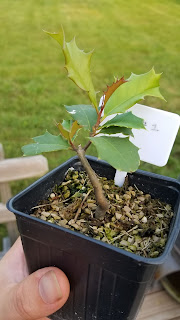 My plan for this tree is to grow it as a shohin sized tree. Stylistically this means a tree which from the rim of the pot to it's apex is under ten inches tall. This means consistently pruning to maintain a finished tree at this height is a difficult study in horticulture and styling abilities. The base of this tree's trunk is very naturally twisted and would lend to this style nicely in the future.