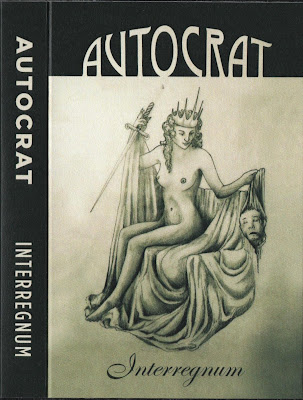 After finding the singular Autocrat track on the Autocrat / Black Knife split so good, I went ahead and contacted the band to try and get a copy of their first release, Interregnum. Drummer Thad Watson got back to me a couple months later apologizing for the delay and letting me know he had copies of the first album and was in the process of potentially releasing the second album on tape. I bought a copy of Interregnum hoping for at least one track to match the strength of "Borges Library" from the split. Early in March, after speaking briefly with Jonathan Scott, the guitarist and vocalist, the tape arrived on my front porch.

The album starts with "The Devil's Dictionary," a mid-faster paced track which has a repeated main riff that is doomy due to the performance of Autocrat. The barked vocals are not reminiscent of the vocals on the split tape. Jonathan here is much more in the vein of a sludge singer than the lower registered clean and sung vocals I was expecting. While there were some screamed sections on "Borges...", the whole track here is mostly screamed. The track is strongest as the main riff switches smoothly into the chorus riff. There are some slight variations throughout to highlight the vocal rhythms but it comes across as repetitive, even with the strong solo section. I'm not sure how much I like the track as an album opener.

The following track, "A Thrown Project" would have been a better opener, with it's moody slow intro and yielding to a strong fast riff to truly get the track going only footsteps into the song. With vocals finding themselves in the raspy bellowed deep clean vocals style which I liked so much from the split, the album truly starts here, for me. Bassist Travis Shelton's performance here is key as well. He finds space in the song and fills it not with intense sweeps or tapping bass solos but with nuanced decisive note choices to give character to the song when it needs it. Third track "Until Thermidor" also shows Shelton taking the opposite direction during the bridge to the solo with a higher-register fill that incorporated melody into a chugging midway through the song. Shelton turns out to be a major influence on the final four tracks and helps these four tracks dramatically.

So what are the standouts for me song wise? It would have to be the final two songs provided. "Black Humo(u)rs" is my favorite track on the record with it's Pentagram-esque opening riff. Jonathan's vocals remind me of Andy Martin of Clamfight with less savage power; the raspy, throaty screams are similar but Jonathan adds some subtle melody and pitch to the vocals. Musically I am reminded also of Revelation and the ever-present Black Sabbath, especially during the elongated solo section where, once again, Shelton is key. The foundation of a solid minute and a half of the song is his, as he wanders through several different bass lines and rhythms to add depth to the song. "Lady of Babylon" is likely the best track on the record objectively speaking. The extensive solo section is a highlight and the track is the strongest evidence for the main influence being Black Sabbath available.

This has been a difficult release to review for some inexplicable reason. I don't know what it was about it that I couldn't get a handle on. Maybe I'm still thinking the name-drop of Candlemass and subconsciously awaiting a grandiose Epic Doom moment which hasn't come yet. In truth, Autocrat are in a strange place between stoner / sludge and traditional doom. I like the vocals on Interregnum however I don't like how syncopated they are to the songs rhythms. This was not the case on "Borges Library," where the vocals had their own quest to follow over the song. Had I heard this prior to the split I would have been intrigued as to where the band was going to progress towards due to the strong musicianship and songwriting and then have been surprised and rewarded fully with the split. Having listened to the releases reverse, I don't want to say that I'm let down by Interregnum but I was hoping for a track to stand out for me like "Borges Library." "Lady of Babylon" and "Black Humo(u)rs" do to some extent but I'm hoping that the next release continues in the trajectory the band took with their track on the Split. 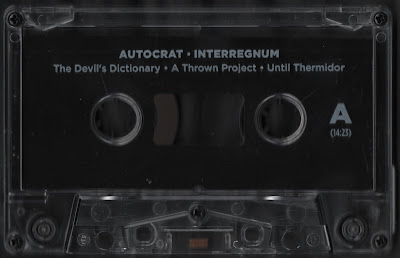