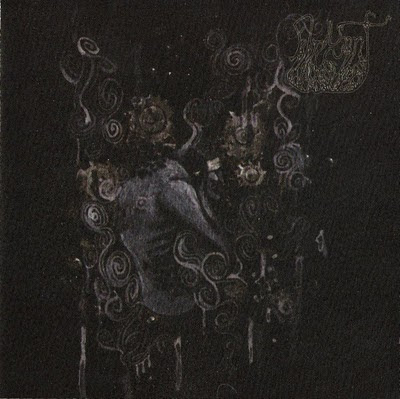 Fabricant are erecting an industrial complex, with the presses and turbines powered by the steam of boiling blood and each gear and cog lubricated with the rendered flesh of the intellectually devoid. Fabricant aren't just playing technical death metal with their demo / EP / fuel-march self titled release. How does an existentially motivated duo more concerned with the questions of human being instead of human being-chopped-up-by-axes take death metal to the next level. How does Fabricant bubble with the kind of originality we see only occasionally from death metal. There is a dichotomy here that I never found in other bands tackling this lyrical subject such as Winds. Sure, lyrically they were on point but musically, it just never really raised questions. Fabricant do this without even realizing they are creating a conveyor-belt of juxtaposition and contrast.

Opening track "Prelude to Aberration" is a minute long intro but more than a tangle of voices with ambiance, the placement of audible words, though maybe unintentional, is hard to ignore. 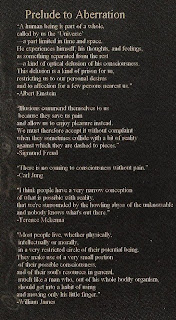 "A human being is....consciousness." The three tracks that follow grind onwards like a tank crushing skulls and then harvesting them, mixing their dust with alloys and then fusing them together; the sound or tone of the tracks contradict this opening statement that a human being is consciousness.

Simply put, the lyrical foreword to the album seems to cite consciousness as the deciding factor of being human and then Fabricant respond with the machinations of reducing ore into programmable extinction devices to remove consciousness from the world. It's a strange contrast. At first. Reading deeper into the lyrics I don't really think Fabricant care much about this whole idea of existence anyway. The indistinguishable lyrics to "Prelude to Aberration" seem to amount to the belief that Humans are weak because of their consciousness. This makes much more sense. We are much better off being programmed... nothing but a series of patterns. Of "zeros and ones." Maybe though, this is the whole point. Maybe consciousness, even at its most human is still programmed patterns. Isn't a habit a pattern? Aren't our lives rules by nothing more than habits? Maybe we are all the gears in one giant machine, that cranks on and on, each human life a gear to turn other gears. This is the question I arrived at thanks to Fabricant. Some metal is simple. Fabricant are not.

Philosophy aside, Fabricant are impressive - all the instruments are well played. Jake Dawson handles drums, vocals and guitars while Troy Roberts handles bass, guitars and also does vocals. Troy and Jake split the vocals with one doing lower pitch vocals, not too far removed from a record such as Morbid Angel's Gateways to Annihilation, and the other doing the higher pitched vocals, a screechy tortured vocal style. The contrast is perfect. I've never heard dual vocals in a death 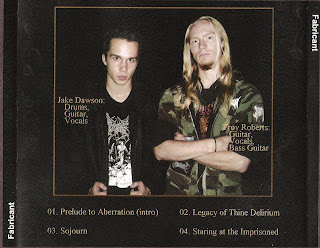 metal band work so flawlessly. Jake's drumming is impressive - tight, complex and creative often using multiple beats over a repeated riff to move songs like components being added onto a product on an assembly line; Henry Ford would be proud.

For me, the best track on the release, is the final opus, "Staring at the Imprisoned." The guitar, though similar in other tracks, is just more twisted, more mechanical, more precise. Troy seems to enjoy playing against the guitar lines with the bass and it lends an awkward and overwhelming sense of movement - a million parts and pistons moving in unison to move one large machine. What really sets this track apart is it's sweeping change from fast to slow rhythms. The track reduces into a slower, more drawn out series of progressions about half-way through with Jake experimenting with cymbals like a chemist combining elements.

I've got lots of great things to say about the band but I do think that a record more than five tracks of this style would get a bit tedious to listen to. Fabricant have created something pretty intense here and with all the comparisons to machinery if you are worried about this sounding too clinical and mechanic, fear not. This machinery is more like a Giger painting than an Escher sketch. Fabricant's main issue for me going forth is twofold. How do you take something so unique and expand on it and, as mentioned earlier, how do you release a long-player that retains my interest for forty minutes. I expect they'll find the parts to fabricate such a release... pun intended but you probably already knew that. 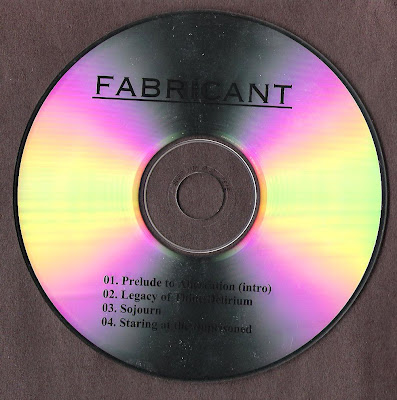 * Through this whole review I kept typing "Fabrican't" out of habit but Fabrican't definitely Fabrican.
Posted by Orion at 11:18 PM No comments: