Temple of Baphomet - In Morbid Fascination Of Sathan 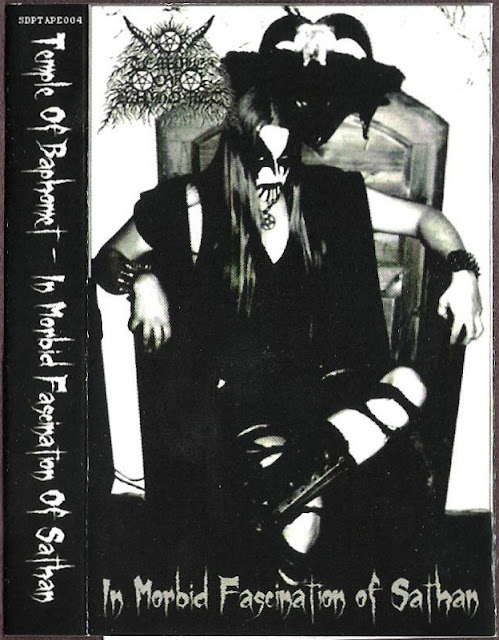 This is a four track demo from Denmark. When I think black metal from Denmark one band comes to mind - and should come to mind for anyone with an interest in the genre - Countess. There are some similarities here. Both show a strong reverence to the classics - Venom, Mayhem, Darkthrone etc. Temple of Baphomet more so... Countess less in certain areas. I come from the position that Lord Beezanborgh has been profoundly influenced by Count Orlok's cinematic recent style.

In Morbid Fascination comes across as very cinematic. I'll be careful not to say symphonic lest we implicate Temple of Baphomet of being something they are not, and do this demo a general injustice since so much of that bastard offshoot is laughable and drags a whole army of fans away into the distance from the task at hand - presenting Temple of Baphomet as they are. There are some keyboards here, also some pianos and moments of clean and spoken vocals however the mood set across the fifteen or so minutes is enough for me to forget I'm at Maryland Deathfest, parked on a side road under an overpass to get out of the sun. Usually I scoff at black metal in this style. The whole showmanship aspect puts me off and creates a dichotomy which I find hard to resolve within myself but this has been done considerably well.

Atmospherically, the album proclaims itself to be a "morbid story" in which Beezanborgh declares "temptation, fascination and damnation led me upon the path to hell." Black metal is known for it's coming of age stories. Varg spent his life living out his own tale in prison and this, though cute, obviously doesn't quite live up to that standard. This carries the weight of maybe Dennis the Menace or Charlie Brown. Musically it sounds less technical, stripped down, and wiped clean of comparable hatred against any of Emperor's classics. It has a carnivalesque feeling not unlike Arcturus. 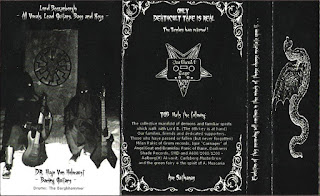 Anyway, four songs. Opener, "A Call from the Distant Stars," is what Joseph Campbell would deem 'the call to adventure.' I wasn't given lyrics but if I was, I'm sure they would read something like "hot alien entities from the distant realms of existence and bleak northern frost show themselves and I became... fascinated." The track is fast black metal in the second wave style with a melody being provided by synthesizers at times. Guitars add grit and raw energy mainly and act as a rhythmic instrument. This seems to be the order of the day through most of the ritual. Many times verses will be arranged traditionally. I find this opening salvo to be a strong first impression - driven, aggressive and moody although repetitive at times. The title track is decent though not as exciting as "A Call from The Distant Stars."

Doomed to wander closes out the release and is pretty much an ambient piece. The meat left for picking then is "Confronting The Hidden Archetypes," a slower piece upon opening but pretty dynamic and is to my ears the most complex of the release from a compositional standpoint. It showcases the vocals which, for me, are a highlight of "In Morbid Fascination..." Lord B. switches between raspy and clean vocals throughout the tape bu here, both are used together to strong effect. It creates a truly distinguishing feature - tough to come by these days. As a last criticism, it was difficult to tell where one track began and another ended. I burnt the whole album to a CDr to listen to in the car as a single track instead of splitting it into separate tracks and because it was a short enough slab of material giving it a listen on my way to and from work a few times without having to stop in the middle of something worked to it's advantage though I see some being bothered by this minute fact. 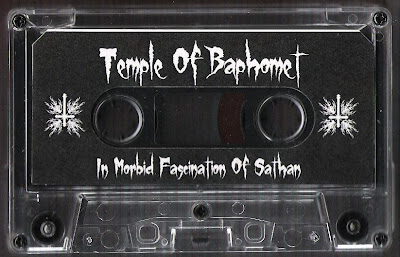