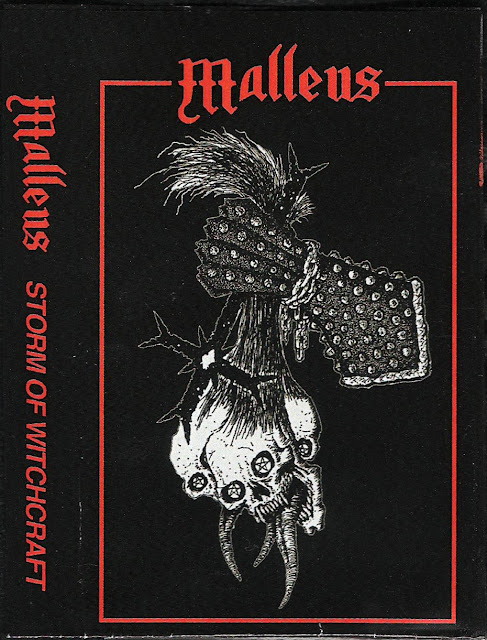 Impressed with their solid live performance in Boston, Malleus had given me enough reason to buy their excellent album, Storm of Witchcraft. The release, portrayed in a throwback fashion to the early-mid 80's period with pen and ink drawn cover of a studded glove yielding a trio of mutated skulls circumnavigated with a deep red logo and type-face, formatively employs the hallmark sounds of Hellhammer and pre-To Mega Therion Celtic Frost to transfer the listener to that time. Though drawing drastically from this aesthetic, subtle hints of d-beat and crust maintain some semblance of influence, but barely. The powerful atmosphere I witnessed live is captured in this very natural recording.

Keeping that qualifier 'formative' in mind, this is an exceptional first release. The strength of opening track "Ire" is possibly the best evidence that Malleus, on future releases, may refine further. The track is representative of much of the release as well. Malleus' strengths are the riffs perpetrated by guitarist The Hammer, which serve as precision tools in their trade. There is a purpose to them within the composition; specifically placed for maximum effect. Different tempos live on the tape and each song, though not always entirely unique, is usually identifiable in some manner. Vocalist and Bassist The Channeler is solid in both departments, though does little on the bass front to add depth to the tracks, mostly following the guitar lines verbatim. Vocally, however he inserts some additional rhythmic layers with his vocals taking the form of small bursts splattered and dripping across the compositions. This contrasts the guitar tone which is a slurry of distortion which still emphasizes the individual riffs and melodies. Another highlight is the stoic simplicity of The Relentless' drumming. A body doesn't always need an over-complicated skeleton to be effective; a snake is essentially one long rib cage and yet survives and excels in each environment.

My largest concern going forward would be some additional depth melodically and rhythmically. Malleus have shown with Storm of Witchcraft a group capable of the sound, attack, and attitudes necessary to take this project further. There does need to be some progression towards more rewarding repeat listens, though. Much as Celtic Frost took that leap between Morbid Tales and To Mega Therion, Malleus must do the same. A track such as "Act of Faith" already my favorite on the release, would have reached a new plateau with just some minor additional accents. The foundation for something ungodly has been set in stone here, and only a few more invocations of darkness to pervade their sound will set them on the path towards something rivaling a large portion of the material that warrants listening in this era of oversaturation. 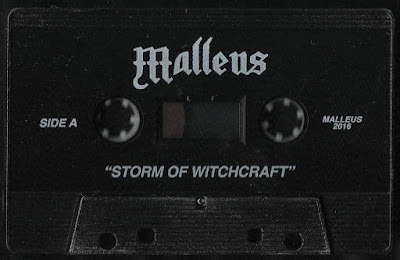