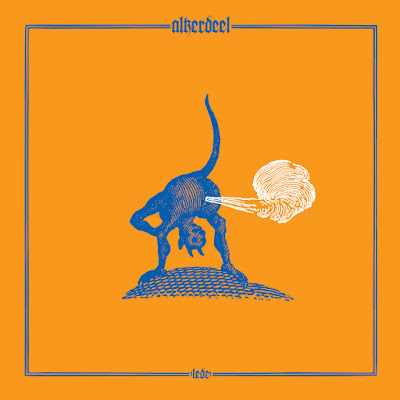 Alkerdeel is one of the many bands that follows the traditional Norwegian black metal path, but their album Lede also adds in a bit of an unconventional approach, and it’s fairly decent. In general terms, there is a really strong Under a Funeral Moon vibe here. It’s worth mentioning because Alkerdeel has a much stronger than average Darkthrone influence. More specifically, the amount of repetition and the bass’s prominent position in the mix harken back to the sounds on that particular Darkthrone album. Since the band goes off the rails a bit, you almost get a subdued Furze vibe, but the release isn’t quite so experimental as that, so maybe it’s just the cover art creating a superficial connection (“fürze” means “farts” in German after all.) The well placed contributions from Mories (of Gnaw Their Tongues etc. fame) also give the album a small push away from conventional sounds.

Outside of the traditional influences in the dirty primitive riffing, a couple of stylistic deviations pop up throughout the release. Alkerdeel’s particular take on dissonance shows up both in tremolo picking atypical intervals and inharmoniously placed bass notes. These bass lines often follow a shuffling kind of rhythmic pattern that further pulls them outside of the main harmony - it’s an interesting effect. One of the better, but dragged out, moments has a spoken word interlude. There, the bass slowly marches notes over a quietly pulsing and crackling wall of guitar notes. Sometimes the tremolo picking jumps from the low end with quick flashes onto the higher frets and strings. The main feel though is a familiar one, like the vibe you get from the simple descending four-note pattern on the track “Lede.”

The intro and effects on “Gråt Deleenaf” are by Mories, and they fit into the music quite well. The distant howling notes especially create a strong sense of tension and discomfort, a clear break from Mories’ usual habit of mixing unadulterated chaos into his effects. His restraint here meshes into the album’s overall atmosphere and mirrors the effect’s light touches elsewhere on the release. It’s a clear hallmark of genuine and thoughtful collaboration, rather than a mere guest appearance solely for the sake of padding the liner notes, but the song itself is still a tepid affair. On the topic of Alkerdeel’s weakness, it boils down to creating songs from a bunch of riffs that are only just “fine” or serviceable. It will work at any given moment because of the interesting mood, but too many ideas seem to circle in on themselves.

Lede’s quality and atmosphere make it good enough to be engaging throughout the entire runtime, but it unfortunately doesn’t leave much of an impression afterwards. It’s only particularly strong point is how the vocal performance is cleverly panned with reverb to create a huge amount of depth to the vocals during sustained screams. So file this one under “likeable but forgettable.” It’s coherent and has its interesting moments, but almost nothing other than it’s somewhat unique approach sets Lede apart from the incalculable volume of other releases out there.
Posted by Apteronotus at 5:05 PM No comments: 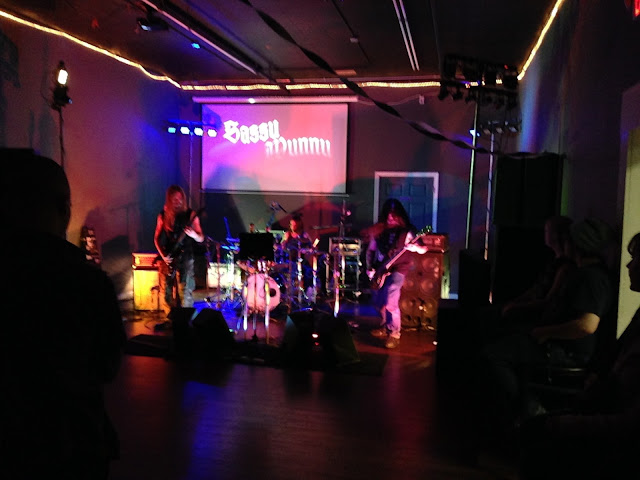 Sassu Wunnu, one of New Hampshire's few high-quality metal acts, released a sad announcement fairly recently. The band is planing to go on an indefinite hiatus, and luckily enough I was able to catch them live during what may be one of their final shows. Below is a brief write-up on their performance.


Sassu Wunnu is the kind of band that blurs your usual genre lines, so it's not ridiculous to take note of their metal influences ranging from doom, black, and sludge. There are moments where they bask in big fuzzy sounds, rhythmic stop and starts, wild tremolo picking, and carefully arpeggiated melodies. Despite the fuzzy tones of the power trio's strings, they were fairly tight in their timing which was further highlighted by the crisp drumming of Puke Commander as his furious movements animated the glorious tattoos across his chest.

The key strength of the band though, and something rather rare, is how well the bass and guitar play against each other. Trading off melodies like they were both guitar players, but never delving into the bass wankery of technical bands, Lykos and King Trash held a great sense of pacing. Some call and response, a nice guitar solo, bass taking the high melody, it was all really cool stuff that never stifled the band's sound. It was even more surprising how well this worked live, because threesomes often struggle to simultaneously maintain a big sound and dynamic song structures. Sassu Wunnu played well and the show was an admirable sendoff for an interesting piece of New England metal. 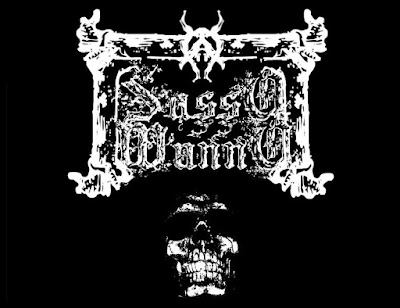 In light of the band's forthcoming hiatus, it's worth mentioning that you can also check out Malacath. Malacath is the solo project of Sassu Wunnu's vocalist and bassist Lycos, and the project is currently quite active. According to the project's Facebook page, it looks like we should keep an eye out for two upcoming splits.

Posted by Apteronotus at 7:42 PM No comments: