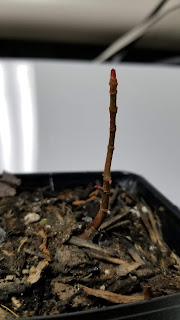 This is a small Acer Rubrum - Red Maple which I dug up last year from the front of my yard.

What initially interested me in this tree is that even though the tree is tiny, there were two small buds low down on the trunk. This gave me hope that I could develop over time some lower branches on the tree which would help thicken the bottom portion of the trunk.

Red Maples make good bonsai subjects; their leaves are small, they are very hardy, and easy to take care of. They grow everywhere and can be found quite easily in nature or grown from seed. The trees produce very copious amounts of seed much like other maple species. During the fall, the trees also produce very nice red foliage and make an attractive specimen.

I did not get pictures prior to this past winter. The small leaves turned a deep red in autumn before falling off in November. The tree was left over winter in my shed at first. After growing some harmless old on the surface of the soil, I moved it outside behind the shed to kill the mold. The mold died but the root ball froze. At this point I moved the tree inside and into a spare refrigerator to thaw out.

I repotted the tree this march to get it out of it's poor soil and into a better mix of soil. Once again I am using the Napa 8822 for this tree. I am putting it in a slightly larger pot to try and influence larger growth through this year and get some height on the tree. In hindsight I probably repotted this tree a little early this year. Next year I will likely wait a bit longer closer to the buds on the tree showing. I raked out the old soil away from the roots to see how the roots grew last year. There were roots growing out of the pot last year so I know that the tree needed to be repotted this spring. Maples and most deciduous trees are best repotted during the dormant season right as spring is forcing them to bud out.

This tree was interested because of the angle it was growing at. I was not sure what the roots would be doing underneath the soil. I thought it might have a single taproot growing to the left of the pot from the stem straight down but instead, there were several significant roots that were spreading out nicely from the base of the tree. It allowed me to cut and prune back the tree quite a bit and still have roots to support the tree. 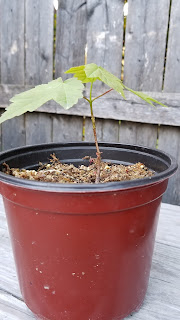 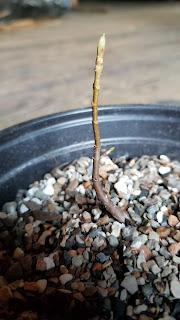 The buds started popping again in late March and I could see the green coming into the apex of the tree (see left). I had stored the tree in my cold, unheated attic after the repot to give it a chance to acclimate without potentially freezing. I kept it watered and misted while in the attic.

The tree now has it's first two pairs of leaves on the apex in it's new pot in my yard (right). I dressed the top of the soil with sphagnum moss to help keep moisture in the soil. The sphagnum also has anti-fungal properties. The little buds lower on the tree have not yet fully formed leaves but are hopefully going to pop soon as I see them extending. I also dropped some slow release fertilzer into the pot now that the first leaves have started to show. Applying fertilzer before the leaves show can 'burn' the tree. 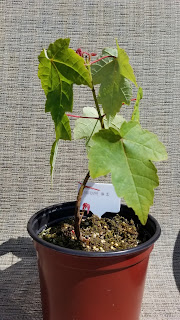 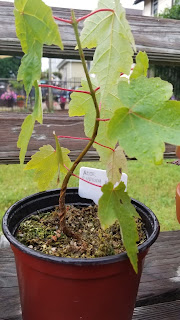 This tree has grown all summer. I pruned the top of the tree back in mid July (see left) and within a few days had new shoots growing at the top and the bottom (see right) where there were latent buds. Earlier in the summer I wired some basic movement into the trunk however I left the wire on a little too long and it dug into the trunk a little. This will heal over in a season or two. Already it is not noticeable. I have fertilized with slow release fertilizer every other month to give the tree the required nutrients.

With bonsai soil such as what I am using in this pot, the trees require fertilization due to there not being any food for the trees in the soil. I am using a 14-14-14 fertilizer in this pot. This means 14% nitrogen, 14% phosphorous, and 14% potassium. This is universal nomenclature for all fertilizers including lawn fertilizer.