Contaminated Tones: With such little information available, can you present a general history of Nyctophobia?

Deimos: It's probably similar to many other one man projects. I couldn't find anyone else who wanted to play the sort of music I did so I started writing and recording alone.

CT: How would you describe your music to someone who is not familiar with funeral doom?

CT: How do you go about composing your songs? What factors help or hinder your creative process?

D: Usually I just start by playing, if I like something that I've played I'll record it then try playing it with different rhythms, change notes around to make it better until I'm happy with it. Then it's a case of trying different melodies over the top of it until I get something that feels right and so on. Basically just changing things and adding parts until I think that changing it or adding anything else would make it worse rather than better.

CT: How did the recording for Beyond The Pillars proceed? What effect or mood were you trying to achieve on your first release?

D: Pretty much as I described for how I compose. Doing it alone means that I have to record as I write in order to get a good idea of how everything fits together. I always seem to go for the same mood- I try to get it to sound ominous and dreamlike as if something bad is about to happen but not necessarily tied to reality.

CT: Are you satisfied with the results?

D: Mostly, although it's difficult to tell as I heard every track so many times while writing and recording.

CT: What emotions do you try to convey with your music?

D: I suppose it is, I just use a second guitar part to keep things interesting. I decided early on that I wanted to record music which sounds almost like nothing is happening but where something always is. I don't really have an opinion about melody some people use it, others don't. Both approaches work beautifully when done well. It's really just a matter of taste.

CT: How did you create the frightening noises in "And They Gathered?" I am assuming you didn't throw a bunch of forks and knives in a plastic tub like Judas Priest.

D: I have to be honest, I'm not sure what you mean. I've listened to the track a few times trying to figure it out but I have no idea. It was almost certainly some combination of voice, guitar, bass, reverb and delay. I have, in the past, used various objects to make different sounds but for "Beyond the Pillars" it was just normal, bog-standard, instruments.

CT: There is no lyric sheet for Beyond The Pillars though the album has lyrics and spoken word parts. Can you give any insight into the lyrics and thoughts you've expressed on this album. What are the themes and topics in the songs? Can you give any particular lyrics to the songs.

D: There are no themes beyond the atmosphere I try to create. If I have thoughts to express I'll write something to express them fully. I don't think music works well for this as it's an emotional rather than an intellectual medium. I just use my voice to add texture to the music, it's very much just another instrument. Bands which try to express something more aren't necessarily bad but if I'm listening it's because of the overall feeling rather than because they have a particular ideology.

CT: How did you go about writing the lyrics for the album? Drunken fits of rage and despair? Sitting in the woods? Driving in your car? Where do you write your lyrics? Do you aim for a specific mood of any sorts before trying to write your thoughts on paper.

D: The mood was already there in the music, the lyrics are always the last thing I do. It's generally a case of having a story in my mind and then distilling it down to a few words which I'll put in where the music needs it. Maybe this approach will change over time as this was the first time I'd recorded anything with any lyrics at all.

Email ThisBlogThis!Share to TwitterShare to FacebookShare to Pinterest
Labels: Interviews 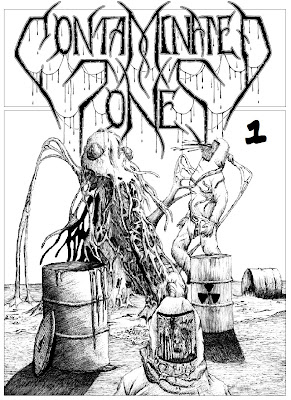