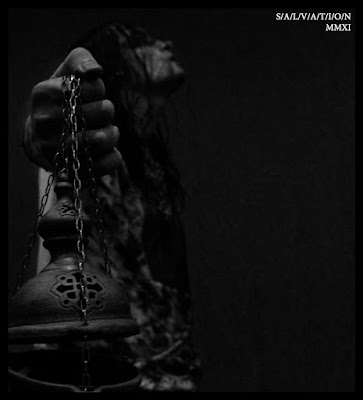 Imagine cold spacey black metal with fuzzy guitars playing entrancing melodies over programmed industrial drum beats. If you are thinking “hey, that sounds a lot like Blut Aus Nord,” then you have a great starting point for Anholt’s sound. That said, “Karma Evangelica” is far from a rehash, but is still on par with BAN’s quality, i.e. incredible. One interesting flair that sets the band apart is the incorporation of Russian Orthodox church samples, a helpful comparison would be to Batushka’s release that came out a year after this one. The Orthodox theme also obviously meshes well with the band’s anti-religious cover art and song titles.

While the drum samples are far from top notch, and some of the percussion’s mixing gets clippy, the composition decisions with the beats are absolutely fantastic. This is critical because Anholt tends to just groove on a melody or a particular mood for a while, but the drums make the repetition immersive rather than boring. Naturally, this approach will appeal more to fans atmospheric black metal than to those who need something more riff oriented. Also it is important to note that the album’s 50 minutes are divided across fourteen songs; so the pacing is crisp and energetic even when the tempo is mid-paced.

Apart from the hypnotic melodies, the best part of this album is the sense of depth it has. All of the non-standard metal elements like synthesizers and effects that you would expect to be at the forefront of industrial tinged black metal are artfully subtle. It’s a perfect example of a less is more approach. It’s like standing in an abandoned Russian cathedral in the dead of winter. Other than the craftily placed interludes, the album’s atmosphere always feels just out of reach in the mix, which makes you want to immerse yourself deeper into the music to absorb every last harmonic nuance. Despite a somewhat digital and crisp production approach the instruments, other than the drums, are satisfyingly thick.

The riffs often center around simple melodies drawn out over somewhat long tremolo picked progressions. A song like “Procreations of Echidna” wouldn’t have been at all out of place on BAN’s “The Works Which Transform God,” but the album as a whole hovers a fair bit closer to atmospheric black metal than it does to BAN’s more experimental releases. A nice example of this is how around a minute and a half into “God below” where the focus shifts from one of the more atmospheric slow paced melodies over to a two note theme that seductively blooms into a series of slow trills. Despite being normal in terms of the album’s quality, it’s an amazing moment that illustrates how the solo-project transforms a straightforward idea into something with real panache.

“Karma Evangelica” has an incredibly consistent quality throughout the album. Nothing drags. On the other hand, it’s important to keep in mind that this isn’t a riffy or thrashy release, so there aren’t a huge amount of moments, crescendos, or musical climaxes that stand out particularly as highlights - it’s just really good in an overall sense. It’s worth pointing out what for me is the most attention grabbing exception, “Terra implet ingluviem meo.” This song’s pulsing even double bass drum pounds along while melodies are stacked onto another and a few bell strikes are thrown in for good measure as the song builds up to a stark and sudden stop. I mention this because even when straying slightly from the album’s successful formula, the music is unquestionably engrossing. This release is absolutely excellent.
Posted by Apteronotus at 8:47 AM 1 comment:

Signatura Rerum - The Legend I 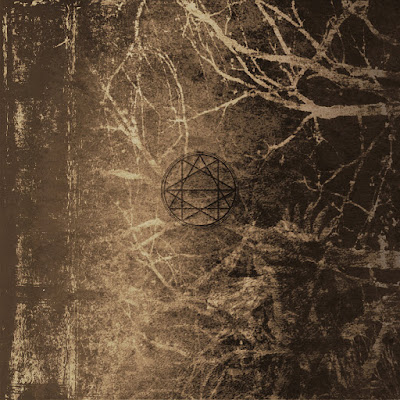 It's apparent from the first moments of The Legend I, that Signatura Rerum are not content with idly strumming strings and blasting along. The Legend I, which started it's crafting prior to their excellent 2013 debut, In Sfarsit, has all the captivating elements which makes Romanian Black Metal so rewarding to explore. The right amount of local flavor is present to be determinedly from a somewhat localized scene but there is also a complexity to much of what is pumped through Signatura's veins on this album revealing more wide-reaching influences. Think Negura Bunget and Emperor sitting next to the fireplace together looking at family photos. More modern hues like Opeth and Agalloch come through occasionally. Much like the prior record there is a sense of maturity on display that tingles and tugs on the tripwires which warn of potential and sets off alarms in the nerve-center. It's not often that a band can stand out among the other similar bands of it's genre but Signatura Rerum are coming close. To achieve this lofty perch requires some form of neurological connection to the material and the feelings it creates. Signatura Rerum craft music that is easy to tap into on a deeper level.

The Legend I is the first in a trilogy of albums revolving around a mythological universe created by the band. This is not unheard of in the black metal realm and it is often not done well. Signatura Rerum offer their universe on a kebab, skewering the characters through the heart instead of allowing the guest to taste and decide. It's my least favorite aspect of the record, especially because the lyrical matter reads a lot like Game of Thrones spoilers. I'd like to see Signature Rerum focus less on the settings and more the themes which these narrative threads contain, as they will be continued on the remaining albums in the trilogy. In this way, the courses are offered on platters to be admired and savored. "Rise and Fall" focuses on the topic of revenge, "Legion and Order" seemingly explores a romanticized death among imagery of winter, and "Sand and Wine" intimates a loss of family, pride, and name. Up front, the band plays with the juxtaposition in each of the titles, but the lyrical content needs a little extra love to shine fully.

Musically, the patient attention to building tension and mood was a major highlight for me. Once again, Negura Bunget's influence is notable in the inclusion of folk melodies and instrumentation details such as flutes in "Rise and Fall Pt. 2" or xylophone percussive notes in "Sand and Wine Pt. 1". The truth behind Signatura Rerum's evocative music is the soundtrack-quality narrative feel of the symphonic elements nodding to Emperor, Borknagar, or Dissection. Whether it's the keyboards leaving their mark on the overall symphonic quality, or details like the xylophones, throughout the record Signatura Rerum use a swath of tools to add variety and story to the music. The two tracks from the "Sand and Wine" chapter have a definite different rhythmic style all their own, at times progressive, jazzy, and technical, which adds a lot of character and defines them as unique among the album. This ability to give the three separate segments distinctive flair is incredibly impressive.

Signatura Rerum have a lot to be proud of with this record, both from the complexity attempted and outcome achieved. There is enough uniqueness to separate Legend I from a lot of other music out there and for this alone the endeavor would be worthy of some admiration; being successful in this aim is worthy of commendation beyond. It's not a record to play in the background, giving much more with attention and adoration offered; this nature is easily dispiriting to once-and-done listens. I imagine a soundtrack before me to something vast and grand so hopefully on the future expansions to this, we get a story and characters that are every bit as vast and touching.
Posted by Orion at 5:43 PM No comments: