All My Sins - Lunar / Solar 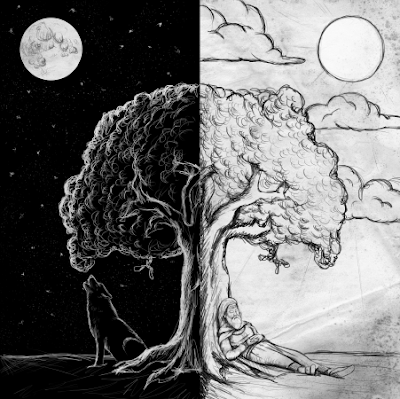 From Serbia, All My Sins present typical but competent black metal in the Eastern European style. Lunar / Solar follows a gap of more than ten years between releases with the From The Land Of The Shining Past demo circa 2004 being the only previous offering. Lunar / Solar aesthetically presents themes of duality and paganism commonplace in the Eastern European style such as pagan swordsmen, nature, wolves, and transformation symbolism. This is all presented by way of the four tracks being split with the opening two tracks representing the lunar and night and the second two tracks representing the solar and daytime. None of this is impressive in itself but at least this grounds the band and release in some form of context. From The Land Of The Shining Past showcased some of this desire to present a complete concept as well, attempting to be "an ode to the forest spirits." Some similarity between the two exists in songs such as "Moonbeast" and "Utopia," a concept necessarily implying transformation towards an idealistic reality. All My Sins declare Lunar / Solar is an ode to the sky. Point is, All My Sins attempts to imbue their black metal with philosophical grounding and meaning.

Where From The Land Of The Shining Past reminded me greatly of early Arkona or Graveland's Thousand Swords, Lunar / Solar sounds more like Drudkh' Blood In Our Wells or Kozeljnik's Deeper The Fall. The overall production is excellent. All My Sins seems to have put a lot of effort into ensuring this album sounded on par with any of their contemporaries while never being simonized. The guitars, performed by 'V', are bright and cutting with the commonly shifting chords clear and distinct. Bass, handled by both 'V' as well as vocalist Nav Cosmos, is measurable across the whole album. The bass is both smooth and full while also gravid with dirt and grit. Cosmos' vocals are well done. For being generic and monotone, he exudes energy which guides the spirited performance.

"Jeka Prve Kise (Echoes of the First Rain)" opens the album with the aim of sounding like a transition from day to night, as the song closes with crickets and insects chirping. It's an interesting way to open a release but it leads into the gripping "Pod Mesecom Prastari Hrast (An Ancient Oak under the Moon)" ably. The first full track gallops along on strong melodic turns and crescendos and the impassioned vocal performance which continues beyond the point of music as the track closes. Third track "Pomen Usnulom Suncu (The Commemoration of the Sleeping Sun)" seems to be the highlight track regardless, with a lot of different ideas and moods mixed into it's eight minute and thirty second duration. Opening with clean guitar, the song ascends into presence, shifting through some early verses in a fast and intense yet lighthearted and frolicking manner. The song offers a laid back break midway, with some fretless bass action by guest musician Bojan Kvocka (Terrorhammer / Kawir) to add to the mood. The aggressiveness picks up again until the end of the track, never relenting. The final track offers another acoustic soliloquy.

Overall, Lunar / Solar easily holds it's ground against other black metal releases so far this year. Though All My Sin's first release in more than a decade resides almost completely in tried and true method and style with the sole exception being the acoustic elements, the obvious effort put into this from both a production as well as artistic perspective is to be admired. The length is also on point for an EP listening experience. At just beyond twenty minutes long, it can be listened to easily without risk of distraction, and enough times to consider the concepts behind it. With the layout being also adequately realized, I would recommend this to those looking to widen their knowledge of black metal from Serbia or the Baltic region overall. You can do a lot worse than exploring this pocket of bands which include Kawir and Terrorhammer. 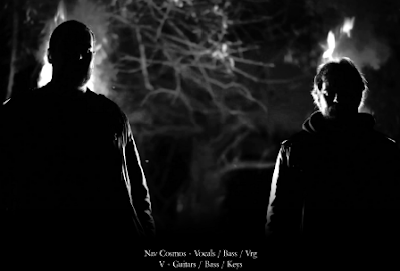 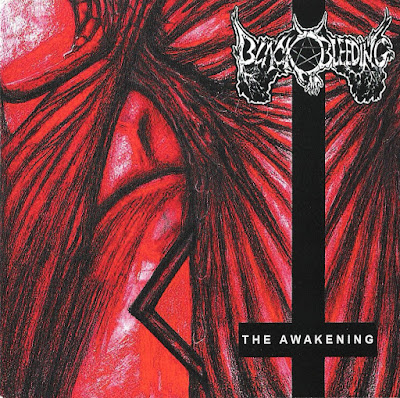 Nihilistic Holocaust recently put out a new CD version The Awakening, a 2005 EP from Belgians Black Bleeding. I was skeptical since I was not a huge fan of A Bright Future, which I felt surged with comedic black thrash that lacked seriousness. This older record, however, is a far cry from what sounded like Gamma Bomb doing their best death metal impression. Now, I'm not exactly how much more serious the actual content here is, because the layout notes that "this release is not hand-numbered because Oussama broke our fingers," and there is a rather silly band photo included but at least it sounds more assertive and angry.

"One With The Universe" has a mid-paced opening chugging riff that expands into more melodic and rhythmic brutality. Including a whammy solo and several transitions that work well in the song, this is the highlight of the record for me. Guitarist and vocalist Alexandre Pomes is at his best in this song in regards to his vocals which are often low and guttural. He tosses in some higher raspy spits and sputterings as well now and then. Opener "The Sleeper Has Awakened" twists through some different tremolo and more bludgeoning riffs with rather intense blasting and drumming courtesy of drummer Balmuzette, who is impressive throughout.

"Demonic Quantum Boundaries" ends the record in massive fashion. The ten minute long epic eclipses several musical ideas. Opening with a "Planet Caravan"-esque genesis before launching itself into stark blasts. The song then sifts through some interesting pinch harmonic slow sections mid-way through before culminating in a few minutes of synth which, in all honesty, is very enjoyable on it's own beginning at the six-minute mark. The variety here is evidence of more potentially interesting compositions from the band and possible experimentation tendencies which I never really discerned from A Bright Future.

I much prefer this style to the less intense modern material. Black Bleeding here sound more like a less technical version of Incantation instead of a second-rate thrash band trying to play death metal. The band claims that they are death black metal on the back of the booklet but I don't get a whole lot of black metal influence. If it is there, it is far overshadowed by the death metal. Perhaps at times the record galumphs, and "Proxima Centauri" hints at the less virulent material you'll find on more recent releases, but The Awakening is a sturdy release shying away from the detrimental elements that seeped through to the forefront. Those interested in the band would perhaps be best off starting with The Awakening and working backwards through their previous material. I can't speak for The Great Satan, their 2009 record, though. 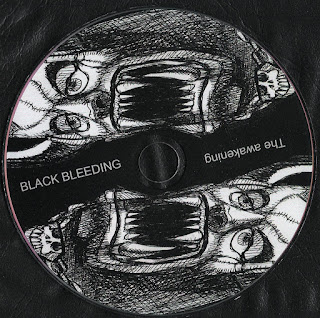