Blasphematory - Depths of the Obscurity 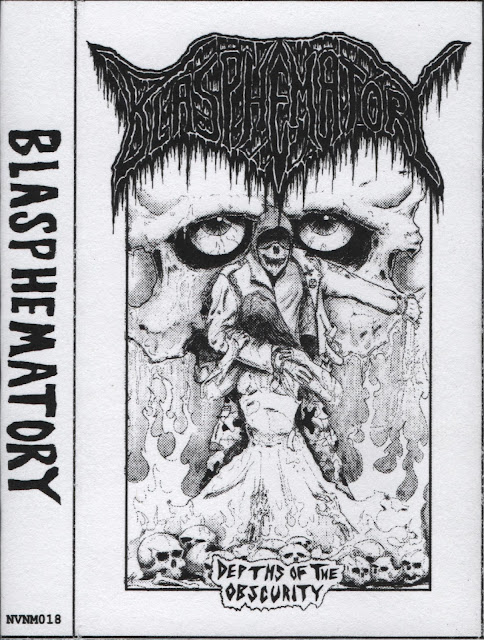 While at work, Chris Warhead of Abazagorath notoriety dropped me off this new demo tape featuring his drumming talents and Joe Aversario handling the string components and vocal belches. To see the baffled faces of those around me as he handed me the demo was a charm, expressions I would not like to forget. In some ways, Depths of the Obscurity could be the theme from the beginning of this receipt of material. The average man, going about his business, is given a small glimpse into the tendons of the underground system by which projects and bands have grown their name for decades. There is an obscure and known, but not understood, current of connections which at it's fundamental level holds all 'this' together and which no digital mass of mob-predilection can subvert through their social media channels, their instagram accounts, or their promotion engines-disguised as metal news sites. The depths are teaming with activity.

Depths of the Obscurity is as solid of a modern death metal demo as can be found in my opinion. I am reminded of the current crop of filthy death metal bands that have - mostly - set the tone of underground death metal for the past several years. Bands like Necrot, Spectral Voice, Undergang, the first two Horrendous albums, hell a large collection of the Dark Descent discography over the past few years leads us back to this style of death metal. Where Blasphematory dig their grave is similar but with a smattering of Swedish melancholy closer to Grave or Entombed. This combination is not uncommon yet often boring. Incantation is also at the front of my mind as the five tracks are realized. Aversario and Warhead intertwine slight hints of grind too, such as syncopated pinch harmonics in first track "Sepulchres Below" which reflect Aversario's grind background. One of the aspects I like a lot is the drum tone which is slightly trashy and rehearsal quality; a subtle but effective supply of nuanced timbre that is often produced-out on polished recordings.

Aversario is the standout on the demo. His vocals are deep and cavernous, demonic amidst the softened tape output. There is a mixture of guitar techniques on the demo. Songs have strong melodic movements such as the instrumental sections in "Sepulchres Below", "Martyr's Tears", and title track "Depths of the Obscurity," which opens with one of the more convincing introductions to a song I've heard in a long time. Solos are to be found splashed across the foundation walls and there are plenty of nasty tidbits of noise, bunk, and twaddle. There are a mix of slow and fast moments throughout the demo and the variety highlights Warhead's drumming as he effortlessly supports with an array of rhythms and fills. Joe handles the bass across the tracks with a keen ear for providing an underlying low end and not simply following every guitar line giving the tracks a depth and fullness that could otherwise be missing. The energy is nonstop and urgent from opening to close.

I don't know why "Martyr's Tears" is a bonus track. In truth, what IS a bonus track? It's one thing for a repress of an album to have a live version or a demo recording or something clearly not linked to the recording but on a demo, I don't think there is a rigid defined definition. Apparently the online release does not have this track. Personally, the online 'release' matters not one iota for me as far as being a real release. Anyway, this is a solid demo for death metal fans and I don't see a reason why anyone following the crop of current bands with old school mentality wouldn't appreciate the clamor residing here. As an after thought, the format of tape is proving to reign supreme once again as the harbinger of solid death metal bands. A large contingent of the top shelf bands' debut releases have been initially tape offerings. The format is still an important step in a band's rise to status finally culminating in the all-hailed vinyl record that has reclaimed it's spot as the gold-standard for achievement in the genre. 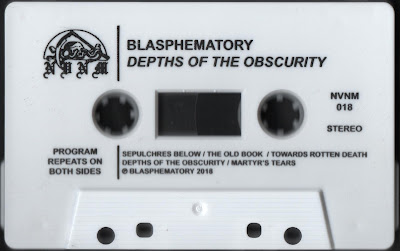