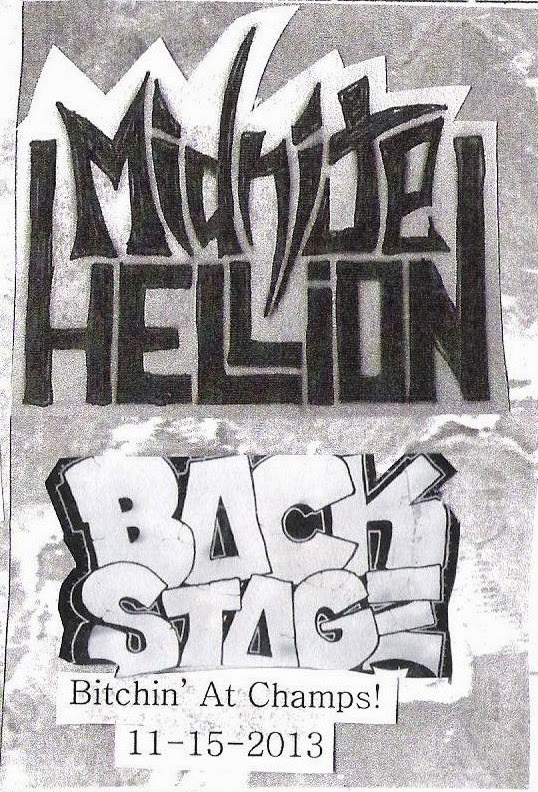 New Jersey's Midnite Hellion are a staple of the New Jersey heavy metal scene, playing shows for the past few years all over the place. This is a recording of, in my opinion, their best show. Vocalist PJ Berlinghof is outstanding on vocals and in my estimation, has been the best singer the band has had. When I heard that Midnite Hellion had parted ways with PJ, Dan Sclavi, Bill Dripps and Nick G, I was incredibly surprised. 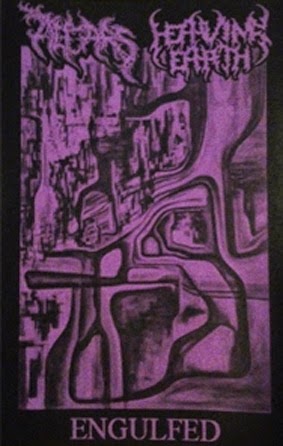 Underground fanatics should be familiar with Nihilistic Holocaust. The French label specializing in all things steaming and nasty runs the gamut in extremity but owner Gabriel has a really good nose for Death Metal and Grind excellence. This slime colored four song split between Australians, Altars and Czech Republic's Heaving Earth is an enjoyable and memorable release that more than makes up for it's lack of originality with four well written songs. It represents both bands particularly well. Both are different enough to create distinction and separation but not so far off that the grouping is odd. Both are fast slightly grinding Death Metal with some abrasive atonality thrown in for kicks and screams. Altars is the more "underground" sounding of the two. Heaving Earth's more polished sound is appropriate for their slightly more technical mish-mash.

I find myself enjoying the Altars tracks more. They remind me of early 90's Death Metal stalwarts such as Immolation as well as more modern projects like Beyond and Mithras. Opening their pair of tracks, "Husk," initiates the cluttered sounding morass that is Altars' tracks. Murky and swampy guitar tones drift across the pummeling rhythm sections with occasional tremolo accents and nuances. Their second track, "Descent (Paramnesia, part I)" is an imbroglio of riffs and drum fills. The Heaving Earth side is, as foretold, cleaner but that by no means should discourage those searching for new Death Metal. The two tracks are quite good, especially "I Am Nothing," where even through tons of percussive ordinance, guitar riffs shine and verses echo the songs memorable intro and it's machine-like emphasis. The groovier parts of the track aren't good and second song "Into the Depths of Abomination" is generic. Though still twisting and wielding enough riffs to continue my interest the overall feeling isn't as strong here as we get hints of Necrophagistesque technicality. The Altars side of the split doesn't have more personality than the Heaving Earth duet but it has a personality which impresses me more.
Posted by Orion at 7:58 PM No comments: 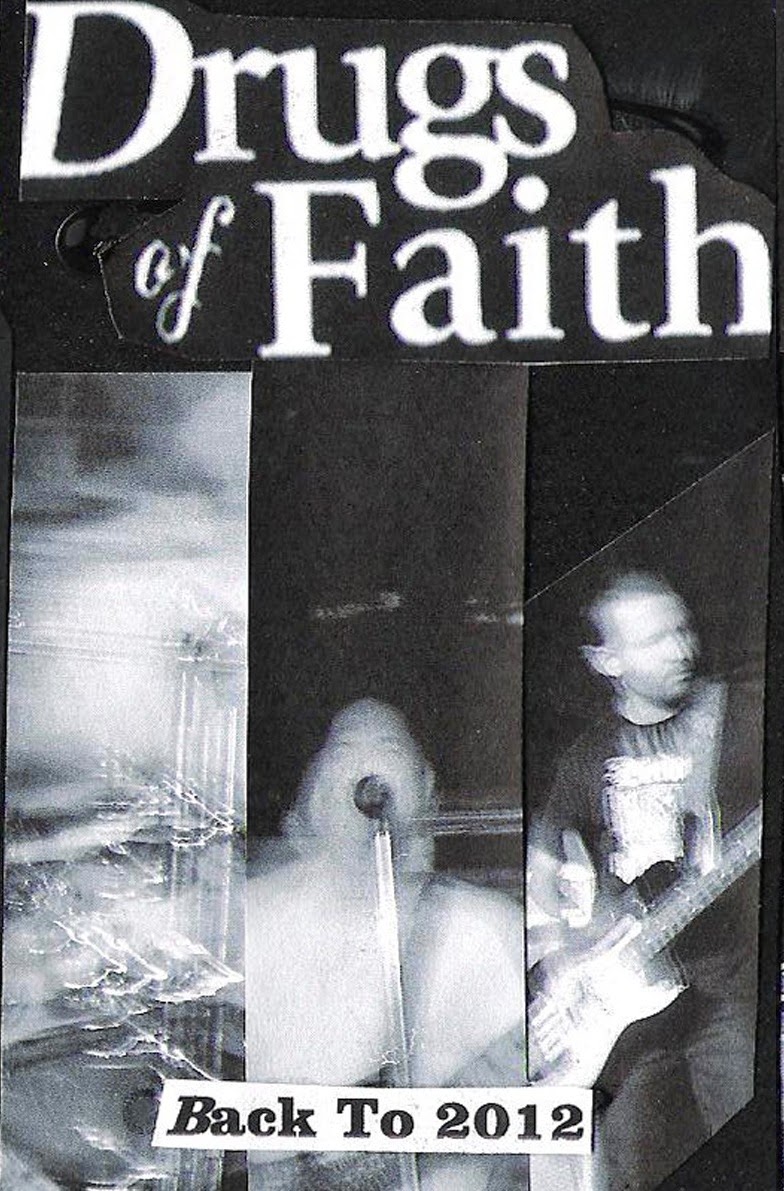 As usual, email for orders.
Posted by Orion at 11:31 AM No comments:

Breath of Sorrows - Suicide Is A Form Of Art... Not Destruction 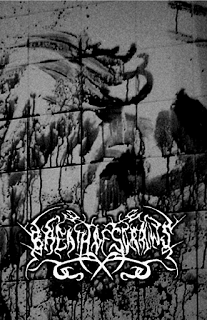 Suicide Is A Form Of Art, Not Destruction is a short two song tape from Nevada-based Breath of Sorrows out on Singularity Publishing. Why drummer Sulphur didn't decide to release it on his own label, Wraith Productions, which released the debut album Through Darkness To Battle I Ride,  is beyond me. It's rather generic depressive Black Metal, however strong melodic sensibilities and a spirited vocal performance pull it up and over the designation of redundant. Released early March 2013, the quick run time of thirteen minutes is still enough for the band - this happens to not be a one-man project - to build and present a couple good songs. Both bassist J. Eirikr and jack of all trades Belial contribute vocals. Breath of Sorrows is completed by guitarist Txivo with Sulphur offering a rather laid-back drum performance.

Between an opening track which shares a title with the release and the next (and last) track "My Distant Dreams Buries In Battle" is a section of samples and synths which is done well, even if the samples sound somewhat silly in context with the rest of the music. The demo-quality of the sample sets the section into the track enough to not force the samples to stand out in a negative way. Suicide Is A Form Of Art, Not Destruction's strengths remain in the meat of the two songs though. Both are mid-paced and moody depressive black metal similar to projects such as Benighted In Sodom or Xasthur. A somber lead highlights the title track while the second song is notable for absolutely nothing in specific but carries a (un)pleasant melody and some inspired vocal wails and screams. Breath of Sorrows is not necessary your collection of depressive metal but it's something which for a few dollars I would chastise someone for grabbing either. 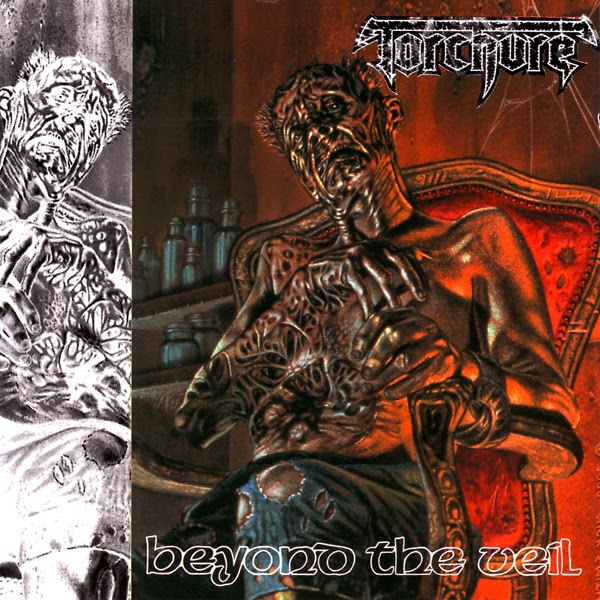 First, let’s take a moment to stop laughing at the intro track’s classic shitty-spooky synth nonsense with bonus harpsichord silliness for that old haunted castle feeling. Once the muscles in your sides stop aching from laughter, it’s pretty clear right away that Torchure’s 1992 album is actually a decent death/doom metal album in the vein of Asphyx, with maybe slight touches of Samael’s contemporary releases in terms of the guitar tone and riffing. Torchure’s distinctive sound here comes from the thin but sharp-edged guitar tones that rely on the bass to fill the low-end, and everything has the mid-paced even tempo that is a hallmark of this particular vein of metal. While Asphyx’s flavor of death/doom wasn’t the most crowded branch of metal, the less prolific Torchure never rose to anywhere near to the same level of renown or popularity. There’s a good reason for this, “Beyond the Veil” is a passable album, but far from a forgotten gem. Overall, “Beyond the Veil” is a release to check out for people dedicated to this particular style, but otherwise not essential.

“Beyond the Veil” is one of those albums that you listen to and think “cool” but a week later you couldn’t praise a single specific thing about it. Mid-range vocals, mid-paced tempo, even pacing, all end up being more than just sub-genre markers, they are ingredients for forgetability. In this sense, Torchure can’t support the heaviness of their doom inclinations. The tempos are slow for death metal, and here this is too slow because the songs tend to languish on rather than strongly conveying any feeling. So, while overall mood and feel could be called tortured, the primary flavor is simply standard doom/death. Since death and doom metal are both pretty damn cool, and Asphyx is cool, Torchure manages to get through the unremarkable album with only a few hiccups. Even the oh so trite nod to Chopin’s Funeral March on the outro to “Resort to Mortality” is something that you can let slide with only a modest sigh or eye roll, because hey it’s not great but it’s not bad either.

Outside of the intro, two other parts of the album are not excusable. On this particular version, “Mortal at Last” and “Vortex of Thoughts” are “bonus” tracks that take a very liberal view of the word “bonus.” Both are unnecessary reprisals of the intro’s silly synth stuff in what is an obvious attempt at cheap variation and album length padding. It’s like calling a hat an “interlude vertebrae” and claiming that it makes you taller - but nothing real is beyond the veil. Just because a band member owns a keyboard it doesn’t mean that the laundry and paperwork covering it need to be removed so it can be used on the album. “Mortal at Last” at least has a clear display of how powerful vocals don’t necessarily mean screaming your lungs out of your body, but these vocals are really more enjoyable in the context of actual songs. 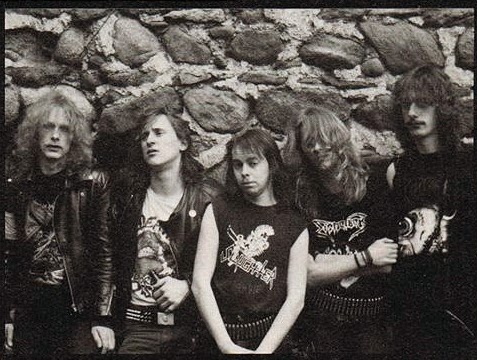 Despite the intro and these diversions, “Beyond the Veil” still has an overbearing sense of evenness. Although the tempo doesn’t strictly stay the same on the album, it may as well have in many places. Musical changes here are muted and fall into familiar patterns because even when things like tempo or vocals or rhythm change a tad, the overall sound never really varies. Many of the chord progressions stay well into the low range and have little variation between the kinds of chords used. The brooding atmosphere and slower tempos are fine and work in small doses, but become a drain when listening to the album as a whole because of this sameness. As a result, the album is overly long, even without the filler material that absolutely should have been cut.

Problems aside, there is plenty to like here and the moderate flavor also makes for moderate quality. The vocals in particular have really smooth transitions from the main style down to deep gutturals, even changing style within single syllables without any struggle. Some of the longer vocal notes resolve with lower growls, less distorted than the initial attack, creating a sense of power, even as the vocals are releasing the notes. This is a sign of the strength and confidence of someone well acquainted with their own voice, also made clear by the tastefully sparse amount of reverb. The drums similarly show a stripped down confidence and strength, using doublebass as an accent rather than a wall, which is entirely appropriate for the style.

The overall homogeneity leaves little reason to point out parts of the album that are high points (or low points aside from the synth nonsense), but generally the better parts are more varied structurally and rhythmically, which allows the band to let their heavier inclinations shine by using lighter contrasts. To reiterate, this album might be of interest for those into the style, or as a historical note, but Torchure’s music is the kind of stuff that would be more enjoyable as part of a playlist including several bands rather than as an album experience. “Beyond the Veil” is not bad, but it’s nothing special either.

Posted by Apteronotus at 5:37 PM No comments:

Contaminated Tones is proud to announce two new live tapes that will be available quite soon!

The first will be a recording of Drugs of Faith's 2012 show at Tobacco Road in NYC. Killer Grind band who recently released "Architectural Failures" EP as well as a flexi with a cover of Sacrifice's Re-Animation. This should be out before the end of July...

The second live tape will be from Massachusetts' own Crypter, a recording of their Sidebar performance from Maryland Deathfest. Crypter released their debut full length on June 24th titled "Suffer The Hands Of Filth." Basically, a modern day Hellhammer... 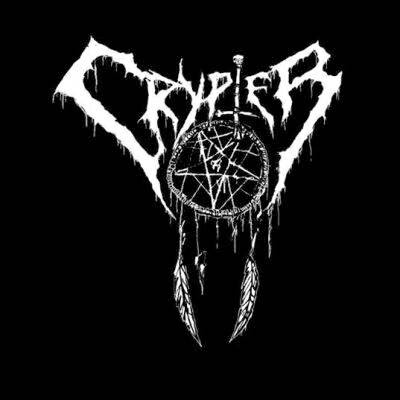