Swine Infection tapes are out, and ready to ship so pick up a copy today if you've got a craving for bbq flavored blackened crust sludge or whatever you want to claim describes the twisted humor that is marbled through this tape. 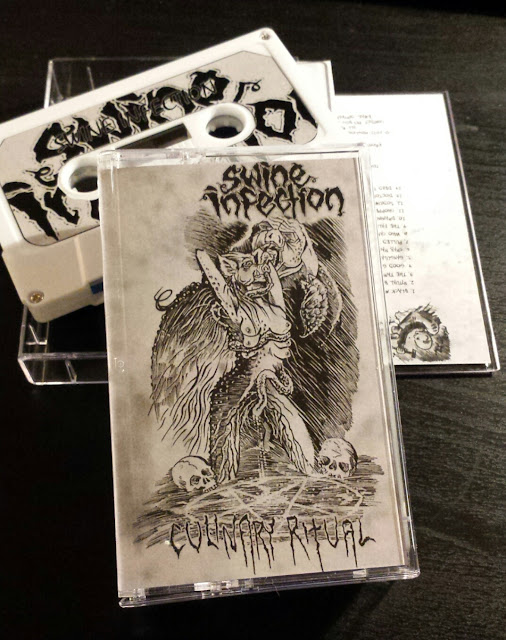 March should see two new releases coming out if all goes well. Keep your eyes peeled on the facebook page for the latest updates on what is coming out. I've got everything basically set to go for the first release which should appeal to the Heavy Metal fans that lurk around looking for their fix. The second tape will be, well, completely opposite end of the spectrum but something totally awesome for experimentalists and self-torture aficionados.

There is also going to be a change to the ordering process that I am rolling out. I'm moving everything to a storenvy account for distro. It will be likely be easier for people, hopefully garner a little more sales for those that have a problem simply emailing me their address and lists, and make inventorying stuff easier. I will still accept orders for product via email for the CTP releases or whatever else people see posted. The site is currently up and I'd love to see a few orders roll in to make sure everything is working properly:

Also, a review for the Acid Cross / Kriegg / Hellripper split just was posted on The Metal Observer so go and read that. Really positive review that basically hit home all the fine points of this ripping tape. "Courtesy of Contaminated Tones Productions, a label that continuously manages to find some of the underground’s most promising bands, comes a three way split between Acid Cross, Kriegg and Hellripper. All three bands reside in the new wave of blackened heavy metal that really isn’t new at all, as it takes inspiration straight the primordial foundations of extreme metal. Doses of thrash, death metal, speed metal and a dash of punk all mix together with blackened aesthetics to form an unholy amalgamation of what I so loving refer to as heavy fucking metal. This split sees these three bands each bring their own distinct take with two tracks a piece."

Also, I have four copies of the new Baphomet's Blood LP, In Satan We Trust, available for purchase. $23. Save yourself some shipping and be aware these won't be available for long. Metal Damnation sold out super quick when it was originally released.

We have two interviews coming up... Apteronotus is working on one and I sent some questions over the other night for another one. Keep your eyes peeled. Busy year coming up. I'll be at Black Sabbath at MSG tomorrow night so if you see the red Manilla Road backpatch, feel free to say hello!
Posted by Orion at 6:21 PM No comments: 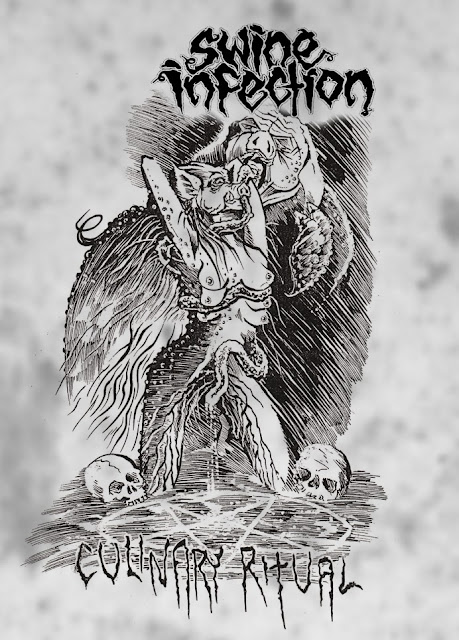 Swine Infection's debut Culinary Ritual is a monstrous combination of crusty punk riffs, thrash, grind, and - of course - bacon! This is a rich tape. Preorder now for $4. This will officially be out on February 17th! The frying pan is waiting... 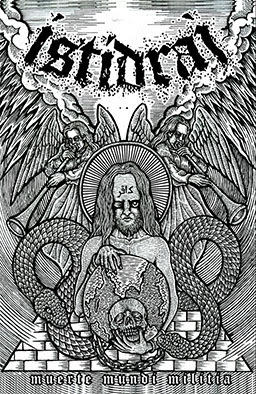 The Singaporean band Istidraj offers up some solid black metal with a healthy peppering of thrash and heavy metal influences. It’s a rather conventional album overall (and their fourth full-length release over the span of fifteen years), but Muerte Mundi Militia has enough surprises to make the release one worth coming back to. Much like the current state of thrash metal as a whole, the bulk of the black/thrash movement suffers from some a serious problem: rehashing ideas that were better executed in the past. Istidraj however avoid this because the band doesn’t quite fit the bill as a straight black/thrash project, the mood has a more eclectic feel, and the thrash influences are incorporated in an interesting way. Bass fills, guitars trading off with one another, distinctive palm muted bridges - all happen as often as waves of tremolo picked notes do. In fact, if you were to switch out the vocals for cleans, you could easily call a lot of this music straight up heavy metal with black metal influences instead of the other way around.

It’s obvious pretty early on that the release is easily a notch above average. Even the moody intro is high-quality with its warbling pads and a sample discussing Pope Benedict, which then smartly seques into martial riffing that foreshadows the album’s mood. While aggressive, the band isn’t stupid about it because Istidraj is heavily focused on riffs. It works rather well, a lot of the riffs are fairly memorable, yet none of them in particular are showstoppers. This is reflective of how the album as a whole isn’t great, but it’s good in a very consistent way. The two exceptions to this consistency aren’t really deal-breakers either. The first is how “Via Negativa” overly relies on a rather boring four-part chord progression that doesn’t sit well with the band’s violent tendencies. The second quirk which reveals a lot about the band’s broad style, is the completely unexpected dubstep remix of “Lux Noir” that closes the album. While I can’t say the song is enjoyable, It’s still another obvious indicator that Istidraj isn’t just imitating other bands or trying to follow a preset style.

Despite how the band successfully melds black, thrash, and heavy metal, I still wish they’d delve more into the frenetic black/thrash side. Instead, Istidraj never really rhythmically thrashes us with those classic high-octane tremolo picked blasting bits we all know and love. Sure, it’s admirable that the band still manages a respectable amount of aggression, but the pacing is often too slow or relaxed. It’s disappointing because Istidraj maintains such a reliable sound while varying speed and intensity, so you know they are capable of really tearing things up. Putting the composition aside for a moment, Muerte Mundi Militia has a really strong mix that allows for everything aside from the vocals to really shine at some point or another. The raspy vocals however come across as a bit too dry and raw as if they were taken from a live recording. It’s a smidge too jarring given the polish put on everything else, which is a shame because the vocal performance is really genuine and powerful.

Black metal fans should definitely give Muerte Mundi Militia a listen. It’s a quality example of a straightforward album. It isn’t derivative, but still offers something that sets it apart from and above the countless forgettable works of music that inevitably fade away into mediocrity.
Posted by Apteronotus at 5:17 PM No comments: 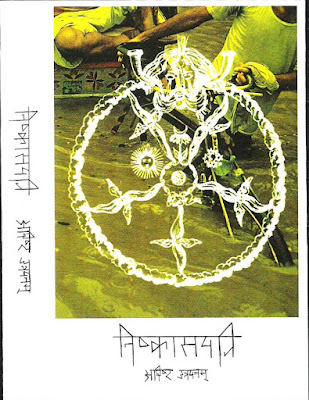 Rid's Vulgar Upliftment is best served under the characterization of militant noise. The percussive structure of the tracks is juxtaposed with the beyond low tuned rumbling of sludgy static. Wails and gurgles slathered across the mass round out the elements. This tape offers the following experience: A dying grassy knoll heads towards the horizon where, at the apex, slowly marching towards the west have arisen the dwellers of the world's sewers. Recognizing your presence, their goo manifests itself towards you. Using a piece of scrap metal, a vomit-hued amalgamation makes a continuous clamor to initiate the charge. Salvaged pipes of various diameters, having been fashioned with mouthpieces, are used to create a low frail drone by another rotting guest. As the creatures slop their way towards your position, the racket of their accrued garbage and waste becomes louder. As they inch closer, your flesh slowly begins to fizzle and drop off in sheets. As the creatures back away, you're left to watch your liquefied flesh trail behind them, disappearing into the distance. 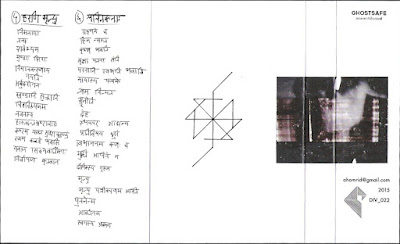 The individual songs are all unified by percussion. Within the continuous sluggish drumming of genesis track "Gutter Life," samples of what sounds like machine gun fire are added to further desensitize the listener. "Prayer" uses a triangle to cut through the ambient, yet the track barely breaks the minute mark and develops little. "7/0" is more melodic than other tracks with some underlying drone tones and bass progression. "Gutter Death" mimics some of the styling of opener "Gutter Life" but is darker, looser, and more solemn. Lyrics overlay the tracks but are unintelligible, mimicking the hieroglyphics in the tape j-card. "Fine Arts" is a highlight track for me. The percussion is set back slightly and washed over with a drone that sits in the frontal portion of the listener's head space when listened to in headphones. It gives a very comforting and mesmerizing listening experience until higher pitched static layers impose with some intensity. "Drainage" concludes the tape rather randomly with electrical static and then a brief snippet of traditional non-western music - perhaps Vietnamese or Cambodian in origin.

Rid's tape is a mystery. While very intriguing as a demo I don't quite know what sort of experience longer material would offer. There is room to expand though. There are some interesting tones, sounds, and arrangements here for those looking for unique listening experiences. The combination of repetitive drums and ambient and soft-noise is also a good starting point for open-minded listeners that would like to explore noise and ambient without trudging through hours of harsh static or the opposite; hours of barely-existent winds and creeks. This is a nice middle ground for noise and the percussion gives some connection back to more regular streams of music. The tape layout is cool too, with arcane symbols and no real means of understanding the purpose of the music other than the listener's own interpretations. 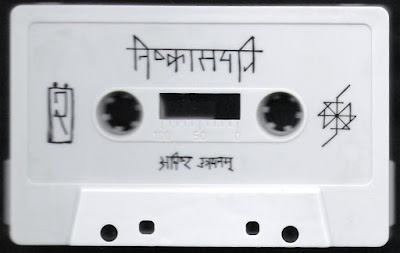