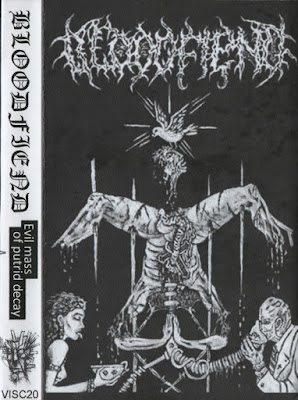 There's death metal and there's Death Metal. Chileans Bloodfiend are a prime example of the clear-cut old school, rough and gritty, octogenarian into nonagenarian, capitalized variety. Evil Mass of Putrid Decay should remind partakers of when death metal demos reigned supreme. The two men behind the project are no strangers to the genre. The duo, Abhorrer and Sekker have songs finely honed to maximum effect. Short, concise, precision impacts of congealed blood-soaked riffs comprise the tracks which don't spend much time getting their point across. With six songs in eleven minutes, there's not a huge amount to absorb, but there doesn't have to be since this is so simply primitive and bludgeoning in it's approach. Sekker is involved with the more melodic Excoriate, whose demo I covered a while back.

The project isn't far removed from a lot of the New York Death Metal which I'm familiar with. Mortician is an influence as well as Cannibal Corpse. Morpheus Descends pops into mind as another point of reference. There's some grind influence as well and lurking around every corner is a drawn out howl akin to Napalm Death's youth-year outputs. With everything ranging from deep bellowing grunts to higher pitched spits of snarl and snot, there's a lot variety to witness in the vocal presentation which helps the demo along. My only complaint here is that there isn't much separating the individual tracks in terms of pacing, tempo, or melody. Other than the slower "I Want To Eat Human Childss" the release is full speed ahead. The inclusion of horror samples adds to a lingering gore and horror theme.

It's pretty clear where the band's head is at with this release: quick relentless death metal in an underground tape-trading quality recording and layout. The Visceral Circuitry tape layout is well done in 90's black and white with an appropriately gruesome yet b-quality stench. I think there is some potential here so fans of on-the-rise death metal would be served by investigating Bloodfiend and the associated acts such as Excoriate.