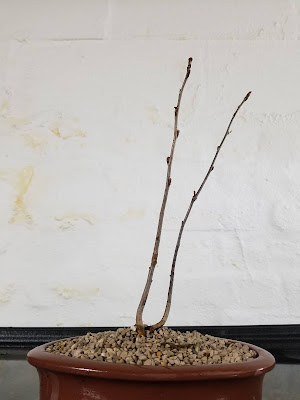 These two trees were grown from seeds last year and I arranged them in this pot in a twin trunk arrangement. The slight slant to the right gives some visual interest to the composition.
I believe these seeds were collected while I was on a break at work. There were crabapple trees throughout the parking lot so I grabbed some seeds to experiment with. I'm not exactly sure of the hybrid but it might be a Malus "Cardinal" or something of that sort. I do expect it to have pink flowers in the future at some point. It is currently in a plain Chinese pot.
The picture to the left is the tree before budding out in the spring after being repotted and roots pruned. Initially, I was going to separate the two trees, which sprouted together, but the roots were so interwoven that I decided to keep them together. 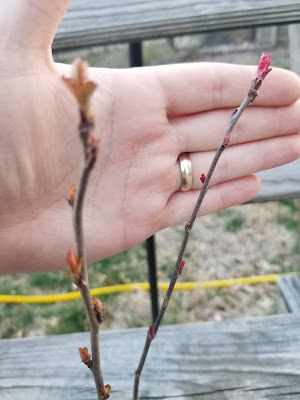 Interestingly, and evidence of the two trees unique origins, they have slightly different new foliage colors with one tree having a reddish tinted bud when swollen and the other a more golden / amber color. This subtle coloration different gives me the impression that as this planting grows, it's best time to show the tree is as the buds swell. I am excited to see if this coloration occurs next year as well.
The tree will not need repotting next year, which means that it should get a really good solid season of growth. It will definitely need to be repotted the following spring after. It's not entirely root-bound in the pot at the moment but after next year it will be for sure. Malus varieties seem to put on a lot of root growth each year.
The tree throughout the summer grew well and was fertilized with 4-3-3 NPK Espoma Plant Tone. I fertilized in April, June, July, and September, falling off my schedule a little bit with being so busy. What is nice about the organic fertilizer, is that it sits on the surface and works itself into the soil, to feed for a prolonged time. 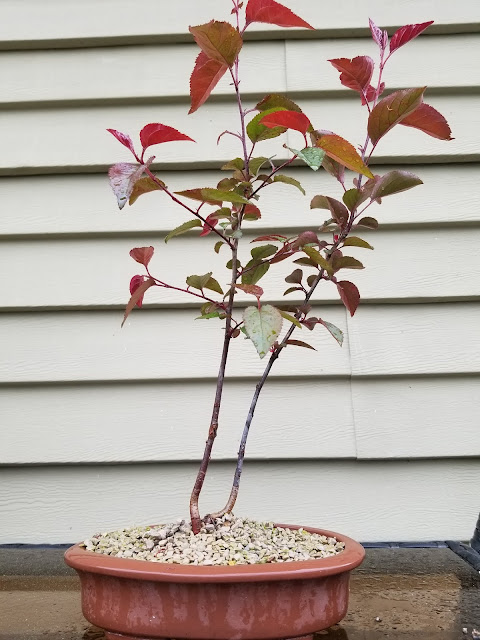