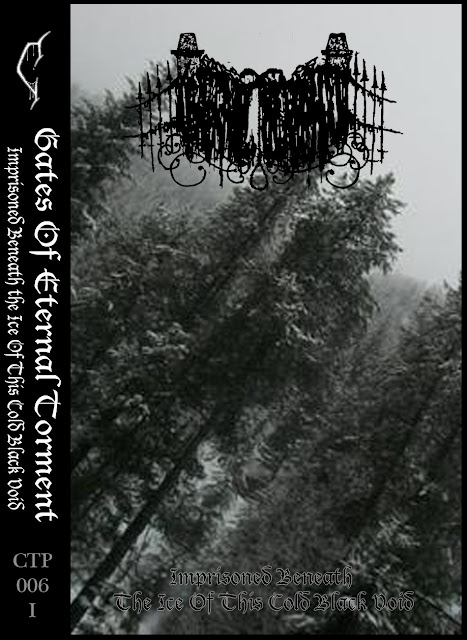 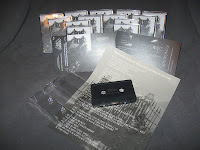 For several years, this release has been a labor of love for the wandering man behind the project. Recorded in multiple places, pieced together like a puzzle while traveling by freight train across North America and tossed back and forth between being released and having promises broken, the honesty and emotion on this release is such that soulful is an understatement. Few releases have a story that spans as much time and space as this. A unique and pure exercise in raw and emotionally distilled black metal.

It’s time for a cold dark slab of Depressive Black Metal from the ever blossoming or should that be deeply withering US Black Metal scene! GATES OF ETERNAL TORMENT are new on the scene and is the one man project and brainchild of Firthornn, and this debut demo release entitled ‘Imprisoned Beneath The Ice Of This Cold Black Void’ has a really old school doom and gloom feel to it, in both it’s bleak artwork and the grim face of it’s lengthy title!
What you get with ‘Imprisoned Beneath The Ice Of This Cold Black Void’ is a classic piece of Black Metal savagery muffled by it’s shoddy production values, so the end result is a distorted cacophony of distressed desperate vocals, catchy blast beats and drumming sequences and a truly bleak perspective on just about everything. Within the four tracks on offer, and the soul crushing lyrical statement that comes with this release is a blistering cry of anguish, reaching outwards seeking solace from the gloom of this world, and on a more musical level exploring the self made cave of sound that is feels the Gates of Eternal Torment is playing from!
Those of you who like streamlined modern sounding Black Metal will hate this. This is a release for the more old school Black Metal fan, those who can dig through the dirt and grime, see past the poor production into the very blackened heart of the music. It’s underground potential is enormous, that’s for certain but generally this is an emotionally crippling bout of Black Metal brutality!

Little is known about Gates of Eternal Torment. Firthornn, the sole member in the band, hails from New Jersey, USA, and his lyrics seemingly draws inspiration from terminal illness, desperation and suffering. Gates of Eternal Torment released their first demo "Imprisoned Beneath the Ice of This Cold Black Void" in 2012 through US label Contaminated Tones Productions, a label that has a history of releasing black metal demos and EPs of the depressive and atmospheric kind.

Given the label's history one is hardly taken by surprise when the bastard tunes of depressive black metal fade in with "Dungeon of Tortured Souls". It is immediately obvious where Firthornn is coming from musically. It's a musical universe where acts like Burzum and Xasthur are king, and though there are a lot of different influences in the music it is by far the influence of the top dogs of the genre that shine through on "Imprisoned..."
Gates of Eternal Torment makes use of a few layers of instrumentation, usually comprised only of vocals, guitars and drums. By no means unusual, but used effectively with ponderous drumming and fairly long guitar tremolo-laden riffs.

It seems to be a general theme with Gates of Eternal Torment that it really is nothing out of the ordinary. "Imprisoned..." doesn't feel unique enough in a genre where there are so many bands, and the fact that it doesn't sound nearly as bedroomy as many others isn't enough to carry the music on its own. It's a good example of textbook DSBM, but it really is too much like some of the bands that have already been established within the scene. Apart from a few strange samples here and there it might as well have been an early Xasthur demo. The band has a lot of potential, and it's not the songwriting in itself that's lacking, but moreso the lack of cultivation. The band and the demo would benefit a lot from working out all the minor kinks and finding that thing to make it special and stand out. 6/10 guitars.
Posted by Orion at 11:16 AM

how can i purchase gates of eternal torment? im a really good friend of johns and i want to get my hands on a copy thanks - katie

I'll email you Katie. Thanks for the interest!

March 2020: I am only accepting physical promos from now on. This works in individual bands' favor, as I will not be inundated with digital things to review.
Recent Releases:
VIVISECT - FUMING DEATH DEMO MC
DEATHFUCKER - FUCK THE TRINITY MC
SACRIFICIAL BLOOD / TRAITOR - 7"