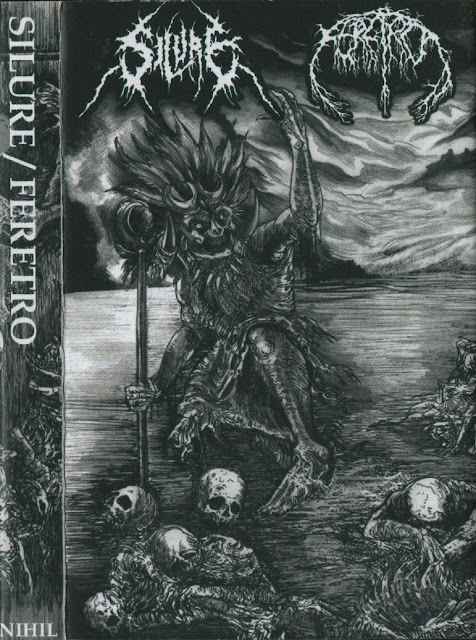 Another Nihilistic Holocaust tape release, this one a split between French Silure and Chilean Feretro. As such, it should be satisfying to those who are interested in H. W. Bush-era death metal. The two bands, however, do approach the genre with nods to different influences, with Silure tilting their noisy heads towards Morbid Angel with a hint of Deicide tossed in. Feretro, on the other hand, dredge more from the Death camp with Cannibal Corpse ornamentation. The whole thing, either way, is quite American overall with, to my ears, with only faint whiffs of stench from the other major hotspots like Sweden or the Netherlands. Both bands represent themselves strongly, with unabashed death metal conviction
I made an attempt to reach out to Silure, even though they were, according to sources, going through internal division unlikely to result in amicable continuation of the project. My sources were confirmed when I received an email. "Sorry guy, Silure is over." The three tracks the deceased offers are from their Route De Troche EP. "Le Saut De L'Ange" offers a tribal drum beat to quickly set a barbarous tone. The creative percussive element alone carries the song, recalling the tribal element throughout with quick two-beat poundings on the floor tom or snare throughout the track. Second track "Oxydent" doesn't have a similar percussive theme to fall back on, unless you count the choppy bridge drumming, however strong melodic personality rings throughout, subtly creating tension as the track tightens after a loose flowing solo interlude. Vocally, M-Kha reminds me of Martin Van Drunen with gravelly snarl. Covering S.O.D.'s "Milk" is an interesting choice to punctuate their three-track offering but, given a death metal makeover, Silure do the track both justice while making it their own. Unfortunate the band is no more - the three songs they present offered a lot of promise.
Feretro, responded right away to my contact. Guitarist and vocals Pedro Velosa supplied some history behind the band's origins in his hometown of Los Angeles, Chile. "Well, the drummer and I started with band in the fall of 2005... Within a year we had a trio line up and a couple of songs and covers of course. Current lineup is almost new, Mauricio joined us on guitars in the summer of 2019, we were playing as a trio but we needed another guitar player due to the musical ideas for what we are working on, so we asked him to play with us and he agreed; and Rodrigo on bass joined us some months ago, we were looking for a new bass player, after the last one left the band for personal reasons, we know him since a long time and we knew he would be a great person to work with, as well as Mauricio... I think this is best line up Feretro has ever had."
Musically, the band mixes the mid to late 80's American death metal with thrash for a genuine and appreciable mixture for fans of old school death metal and death thrash to salivate over. "Primordial Ceremony" opens their offerings and sets the altar with a visceral guitar tone, not over-produced at all, but clear, raw, and entirely natural in dynamic and gruff. The ebbing and flowing of distortion rolls through the slower bulk of the track before Feretro recapitulates with it's memorable tremolo theme. It reminds me of Death's Human in it's attack and tone. The percussion, which isn't quite as taught as that  hallowed record, is set back in the recording, though the tinny snare stands out. Pedro clarified the band's main influences, expanding upon the core US influences. "We had and still have a variety of influences but may be the most important ones, speaking about music more than sound, were Pestilence, Obituary, Sadism, Sadistic Intent, Unleashed, Vioggression, Pentacle, Torchure and Death."
Feretro's rhythmic elements come together naturally and fall in line behind the guitars which are the main focus and most noteworthy musical element. Bassist Rodrigo chases behind the guitar lines adding the requisite low end heaviness while Felipe is animalistic in his drumming, spitting forth primitive death metal and thrash beats to support the weight of the songs. Second guitarist Mauricio is not present on these tracks, which were assembled by Gabriel S. of Nihilistic Holocaust. Pedro explained how the split came together: "I haven’t heard about Silure before Gabriel talked me about the split. We did a trade with Gabriel when we released our last e.p “Deathsolation” and a couple of months later he told me he was looking for a death metal band for a split with Silure and he wanted us to be there, we had no new material recorded and he needed something quickly, so finally we agreed to use the songs of a Cd-r promo which contains two songs from the e.p “Exhume rites of horror” and two from the last one “Deathsolation”.
With Silure's existence truncated, this split - for me - is really about the Feretro tracks, which are solid old school death metal with zero regard for modern sensibilities. Feretro's goals, in a musical regard, I fully support. Pedro's concern for preserving the culture of old school underground and extreme metal is just as laudable. "All of our works have been released on physical formats, I don´t like CD-r neither, but love good tapes, the thing is that we do believe this is the way it must be, in that way you can not only listen to the music, as in streaming, but also you can read the lyrics, observe and analyze the inner art (not only the cover), pictures, credits. I mean, it’s not only music it’s a whole work, sometimes everything is related, as king Diamond’s works for example, and it deserves to be on physical format to be truly appreciated and totally understood".
Posted by Orion at 6:06 PM