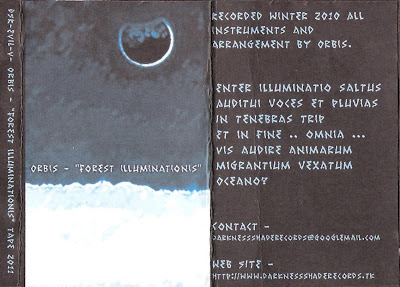 I expect Orbis will become the next ultra productive black/ambient project, releasing product not measured in copies but in shear tonnage. That's just my prediction. Until it comes to pass Orbis, a UK export, have successfully released two demos: Forest Illuminations - a sixteen minute track meant to create the feel of being in a fores - and the more recent, The War Trilogy, covering the subject of World War Two.

The Forest Illuminations tape, released through Darkness Shade Records, is a minimalists romp through a rainy night in the darkest forest in your town. A steady rain and occasional blasts of thunder, which sound more like that EMP Pulse weapon from Command And Conquer Tiberian Sun, are eternal companions throughout the duration of the demo. Also present is a synthesizer playing the same notes over and over with little variation. For ambient, it's a bit excessive in it's nothingness but I know that there are some out there who will like it. I find it just a bit too meandering and unfocused. Even walking aimlessly through a forest, you have to end up somewhere... 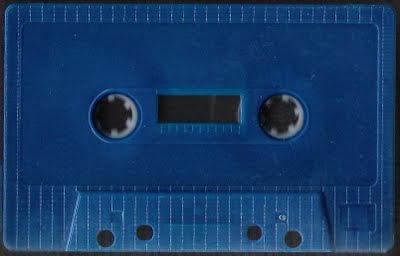 All things set aside, Forest Illuminations is a pretty lovely tape with it's own personality, like both of Orbis' works. Unfortunately Google Translator is a pain to use to translate the Latin phrase inside the insert but it roughly translates to something about "faith and science and the rain in the darkness of the forest making it difficult to hear the oceanlike migration of souls." If anyone knows Latin, please send me a translation. I've enjoyed listening to this four or five times sitting in the dark while going to sleep. It's a great tape to fall asleep to, not because it's boring but because it is pretty soothing. 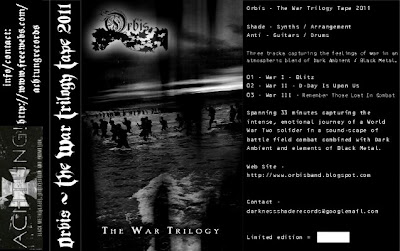 The War Trilogy is a different beast. More narrative than the Forest Illuminations tape, the concept spans three songs, thirty nine minutes, which includes some similarities to the first demo, but also some harsh raw black metal blasting moments such as in the beginning of opening track "Blitz" and the beginning of second track "D-Day Is Upon Us." Black metal wise, it's a cross between demo-era Besatt, Taake and noise. The arrangements on this demo are more complex and offer more replay value than the Forest Illuminations tape. Still, long synthesizer passages exist for those fond of the first tape's near vacant metallic stylings. You can find these passages on each track though the last half of The Trilogy's final piece, "Remember Those Lost In Combat..." and also the second half of that eighteen minute drone. Also present are samples of famous speeches such as Churchill's We Shall Fight On The Beaches speech and also a sample of a radio broadcast announcing Hitler's death. They deliver a welcomed textural contrast and are well placed, adding to the narrative of the tape and also to the release's overall atmosphere.

Where Forest Illuminations is adequate background music for a drugged out lonely night, and I assume that The War Trilogy could be also, Forest Illuminations is simply not as gripping as The War Trilogy, which is an exercise in how to produce ambient that offers the listener a chance to find their own meaning amidst the various sections and arrangements. You could follow the track's peaks and valleys to find yourself escaping the gunfire of the Polish invasion, or walking amongst the countless dead after witnessing the slaughter. You could feel the madness and hopelessness of a seemingly endless war outside your window only to stroll amongst the rows of crosses and buried, all the while hearing the explosions and gunshots forever ringing in your ears. This tape offers something unique and special and, for the price, is worth it for seekers of raw black ambient. 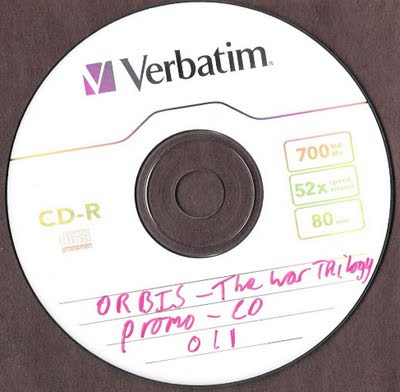 (I got only a promo of the War Trilogy so, this is what the promo looked like. The actual tape will, definitely not look like a disc. I promise. Don't try putting the disc in your cassette player.)
Posted by Orion at 10:45 AM