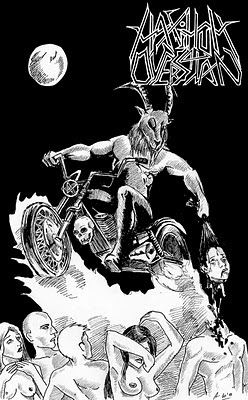 Maximum Oversatan - Too Evil For Hell

Fans of Venom and Motorhead and crusty dirty first wave black metal rejoice, Maximum Oversatan take the formulas of the classics and worship them openly and righteously. Metal demos as metal demos should be. Too Evil For Hell is an unsubtle mixture of alcoholic recklessness, overt satanic influence and total disregard for modernity. Sodom and Venom covers and three original tracks fuming with malice and lust for blood.

Sometimes, bands and their releases can be absolutely intriguing, and Maximum Oversatan are one such band. As the forum post which introduced me to the band said, "They sound like their name". Frankly, that was enough to get me interested, and if the name hits the same switches in your head as mine, you should be too. The normal order of things is that bands ask me if I'll review their material, but not this time. At risk of sounding like a cheeky bastard, I directly asked for a link to their demo so I could listen to it and review it, and that's precisely what I plan to do.

Picture, if you will, what would happen if a band were to travel back in time and distil the essence of a 1986 not-quite-black-metal-yet Mayhem, and then, to gain incredible devilish metal powers, drink it, presumably with Jack Daniels. Maximum Oversatan are a bit like that. Speed metal, with more than a touch of black-metal thrown in to the recipe. Raucous, raw and with a motorcycle-riding, greasy and dirty sound which the demo's artwork, and the bands name, as I've already mentioned, really encapsulates. The whole demo is a glimpse into a mad and rather satanic world of chaotic, percussive and rabid metal - Thundering drums carry the swift, vicious tracks along with a possessed energy and natural, but also very thick forceful and solid presence - it may be a demo, and quite a raw one at that, but the drum sound is certainly one to be admired - Clearly drums that have been recorded well from the onset, as opposed to meddled with excessively afterwards. Soaring angrily over the percussion, the vocals are caustic and enraged sounding - not strictly a conventional black-metal shriek, but something frequently deeper and more gruff, a harsher and more bestial version of, for instance, Venom, as opposed to a shrill and piercing screech. This has the effect of giving the music quite a muscular edge, which is enjoyable to say the least, and makes for a more raucous and meaty listen. Adding to this is the guitar tone, which while quite treble-heavy, also has a lower end with a rasping, buzzing tone which makes a number of the riffs into the sonic equivalent of an iron fist.

You can tell a lot about a band by the songs which they choose to cover, and on Too Evil for Hell, the covers probably say a lot more than I possibly could about Maximum Oversatan's musical direction. Going by their sound, I can't say I'm surprised by the presence of both a Sodom cover and a Venom one, both of which are done with an enjoyable level of creativity and spiced with Maximum Oversatan's own style, particularly "Welcome to Hell", which the band have taken and made into perhaps even more of a swaggering, spitting occult monster of a track than Venom made it the first time around. Being a demo, one might expect the production to be a little bit rough - and it is, there's no denying that. At the same time, there's not much point in denying it, because the rough and haphazard production fits the music's coarseness like a glove, in fact, I'd be happy to hear an album or EP with this level of neatness, or enjoyable lack thereof. The guitar tone is a little bit buried in places, although in others it sounds great, which suggests a bit of inconsistency in the volume levels, but given that the whole demo is something of a maelstrom, it doesn't have too much of an effect on the balance and flow of the demo. Perhaps the original songs aren't quite anthems or instant classics just yet, but the whole demo has a real sense of solidness and an attitude which metal can never have enough of.

"Maximum Oversatan reeks of old school filth. Upon first listen it should be very apparent where this New Jersey duo pulls their influence from. These dudes harken back to speed metal and the earliest days of black metal, an era that not many new bands seem to be gravitating towards. Often echoing Venom's early material (whom they also cover a track from on this demo) but never to the point where it seems like some shitty tribute band. Consisting of three original tracks and two covers the demo gives a nice sample taste of what this band is all about.

The first thing that one will notice when putting on this demo is the raw, throwback sound. Naturally early demos from bands are fairly lofi but if this were to be played with no background knowledge of the band pinpointing a recording date would be an impossible feat. The vocals are delivered by what appears to be a possessed man on the brink of insanity. Little technique is used and it fits perfectly with the stripped down sound Maximum Oversatan churns out. The three original tracks are fairly straightforward and to the point. Sure, at times some of the riffs may seem vaguely familiar but they hit the mark where it counts with this style, delivery. The thrashier moments on these tracks come with a high level of intensity and are sure to whip your neck into a seizure-like frenzy.

Overall Too Evil For Hell is exactly what the name would lead you to believe, a sinister, primitive slab of heavy metal. Satan would be proud but unfortunately he is not evil enough to listen. Given that we only get the chance to hear about ten minutes of original material here it is hard to form too solid of an opinion. I like what I hear though, and if you like the earlier bands that influenced black metal chances are you will find yourself playing this a lot more then once. Give this a listen, thrash around like a barbarian and perform some sort of bloody ritual. "

"Do you like d-beats? Do you like Satan? Goats? Hell? Tits? Then MAXIMUM FUCKING OVERSATAN is for you!

Torn from the foetid bowels of New Jersey in 2011, this horrid horde of hellraising miscreants sprang was unleashed upon the world late last year with the debut demo Too Evil For Hell. With production and songwriting halfway between early Sodom and Hellhammer with a syringe full of punk to the arm for good measure, this shit is any beer swilling metalpunk's wet dream.

The demo contains 3 original songs and 2 covers. The originals are rough, sloppy satanic speed metal assaults that follow in the anthemic footsteps of Burst Command Til War, To Hell and Back, etc. Just TRY not to sing along to the chorus of Reaper's Night after a couple listens. The originals all wear influences on the sleeve but the riffs are cool enough that it doesn't matter. The covers are (surprise surprise) Welcome to Hell and Outbreak of Evil, both of which sound great belted out by frontman Atomic Destructor From Hell.

Some listeners might be turned off by the extremely raw production, occasionally off kilter drumming, and overall sloppiness of the whole affair. But y'know what? Fuck you. That's part of the magic. This sounds like it came from about 1984, just before thrash and black metal properly got underway; posers fucking beware. To sum it up simply:

There's a Sodom cover, there's a Venom cover, and there are three original songs that I'd believe if you told me were rough cuts from either of those bands. Maximum Oversatan put a more extreme edge on the spirit of these bands - they sound furious, hell bent on making extreme heavy metal at reasonably high speeds. The fierce feel of the music is more like that of the bands who paid tribute to Venom and Sodom in the late 80s, with huge sounding drums and dirty guitars and vocals mixed together quite roughly.

It took a while to get used to the drums being so loud and booming in the mix, though they seem to calm down a bit on the later tracks. The sound of everything is pretty much perfect for the band on the title track, where Satanic speed metal meets Motorhead's rock and roll - the drums get a bit faster, the vocals are coherent and crunchy, and the band fully lives up to its name. It's rough, rockin', and has just enough of an extreme metal tinge to make it really appealing to fans of the retro blackish speed metal type stuff. All of the recordings are first takes, so it's sufficiently rough without being sloppy, nothing at all is polished.

It's easy to describe the band simply - they're called "Maximum Oversatan", there's a Venom cover, a Sodom cover, and the songs in between... and they're good. 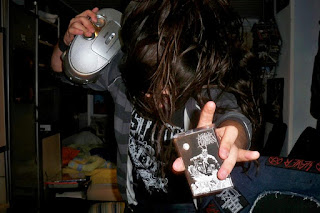 Comments are moderated to prevent spam! Please leave comments. I will post all comments irregardless of what they say as long as they are not spam