Excoriate - Of The Ghastly Stench 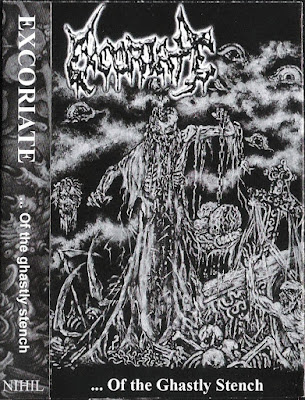 Excoriate's ...Of The Ghastly Stench drips and dangles it's murk into your brain with dangerous effectiveness. This death doom mixture is the result of over ten years of refinement in their trade. There is a lot here that reminds me of other South American death metal such as Mystifier or Headhunter DC, but also there is a twisting usage of melody akin to the Dutch scene. There is also something nostalgic about the presentation overall; the raw and unrefined guitar tone, the black and white cassette j-card, the improper capitalization of song titles, and the overwhelmingly swampy sound of the four tracks.

The pacing on this release is spot on. "Teofisto", an instrumental introductory track sets the stage for the expertly twisting "Oh! Peaceful Derketa", which slithers and never truly clicks into a predictable rhythmic pattern or style. It's something which Excoriate do particularly well which befuddles other bands. What could be construed as the chorus in the track is an instantly memorable riff which drops at all the right moments of the track. Midway through the six minute long song-arc, Excoriate borrow some rhythmic influence from Celtic Frost in transition to a slowish section with creepy bass melodies which further morphs into something not unlike the iconic - iconic to me, at least - "Osculum Obsenum" from Mystifier's Wicca.

Where "Oh! Peaceful Derketa" is a slower, brooding track, the pace picks up with "Black Streams on the Ground of Cruelty," but the unconventional riffs and melodies are retained at the quicker tempo. Francisco Rojas experiments heavily with guitar leads and noisy tremolo runs to cast a demonic and evil cloud across final track, and one of the best song titles I've heard in a while, "Ghostly Stench of Mortal Remains." It's the better of the two faster tracks for me, with a seemingly non-repeating main riff full of shifting power chords under flowing tremolo patterns. The song writhes under the serpentine tremolo riffs. Drummer Lino Contreras and Vocalist Fernando Olivares somehow manage to know where the song is going, and while I find it hard to follow from a structure standpoint, it's engaging regardless, and never gives the impression that the band is also lost.

Excoriate take a death metal foundation and finding a way to give it an identity they can call their own style. It's easy to appreciate a band that offers something fresh in each song, never rests on tropes or a stereotypical stamping and pasting of barely nuanced riffs. ...Of The Ghastly Stench is moist, dark, brooding, and definitively creepy. If you've ever claimed there's no good death metal coming out in the early 90's vein, Excoriate stands to correct your assumptions. Nihilistic Holocaust did right by putting this tape out because it deserves some recognition. I'm off to find Excoriate's earlier demos and material.
Posted by Orion at 7:26 PM